Description of Ancient Domains of Mystery

To paraphrase the manual: "Somewhere in the Drakalor Chain, a gate has been opened.

Through it, the radiant energy of chaos has invaded the world of Ancardia, corrupting and defiling all that it touches. Hordes of monsters, weather gone mad, and unmapped dungeons stand between you (the hero destined to save the world) and the gate. Time, too, is your enemy, for the forces of Chaos actively work to corrupt you; your exposure to the fell energy granting you strange and twisted powers, even as it slowly subverts your body and soul...." Actually, the best writing can be found in the manual, not the game. Ancient Domains of Mystery (known as ADOM to the most avid fans) is a complex dungeon crawl set in the best tradition of UNIX megahit Rogue, and in many ways is a direct spiritual descendent. While other Roguelike games (e.g. NetHack and Unreal World) emphasize plot, quests, and puzzles, ADOM retains and greatly expands Rogue's hack & slash gaming goodness in a randomly generated dungeon. Purists would argue that battling chaos is far more interesting than hunting Balrogs or Amulets of Yendor -- but this will definitely be a game you play for the strategic elements and excellent combat system, not atmospheric storytelling. As with other Roguelike games that are based solely on ASCII characters, ADOM's graphics are ugly, the sound nonexistent, and the plot is banal. The sheer number of features, options, and tremendous replay value are what have made the game into what it is today. Creating a character, for example, requires choosing from over 200 combinations of race and profession. Since your choice determines statistics, equipment, skills and alignment; each character is a unique experience. From hobbit necromancers to troll barbarians, there are more than enough characters available to accommodate a wide range of playing styles and skill levels. The dungeons are filled with a rich and unpredictable variety of items to aid your quest. Scrolls, potions, amulets, cloaks, girdles, swords, shields, wands, tools, gems, armor, books, boots and gloves are carried by monsters or left behind by previous adventurers. They vary in magic properties, material, and workmanship; much of the game's challenge and appeal is in trying to determine just what your equipment can do.

The monsters, too, come in many flavors, varying in intelligence, alignment, and attack style. While some use melee weapons, others breath fire, cast malevolent spells, and summon hordes of monsters. Beginners be warned, though: ADOM is a difficult game. You can expect to lose many, many characters just learning how to survive; the information you get from their unfortunate demise aids your subsequent games. Even after you have built up a lengthy mental list of things to avoid, you must learn to deal with the many problems and situations you encounter. These mini puzzles are generally very well done -- poisoning arrows and blades can be accomplished by dipping them in a potion of poison, a pick ax can be used to tunnel around a door containing a deadly trap, and you can dispose of a cursed helmet by standing under an acidic waterfall and waiting... There are multiple solutions to most of the problems in the games, although the puzzles and quests are by no means as intricate as those found in NetHack.

Overall, ADOM is one of the very best Roguelike games today, and a great addition to any RPGer's library. If you are a Diablo fan and have never played ADOM, well, you're missing out on a revolutionary, complex RPG that offers far superior gameplay and infinite replayability. Two thumbs up! 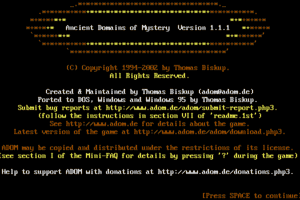 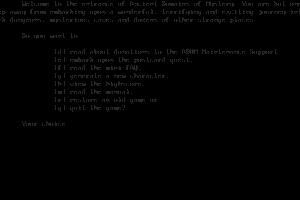 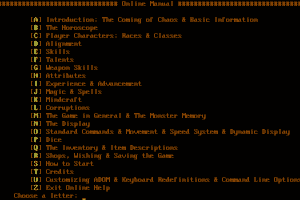 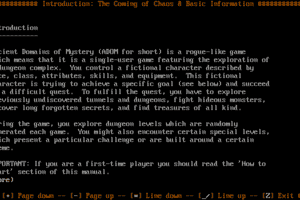 Get the new version on Steam!

ADOM takes place in the fictional world of Ancardia, in the mountainous Drakalor Chain. For 6,000 years, it has known relative peace, but recently reports have spread of the appearance of dangerous dungeons and frightening monsters. Khelavaster, a wise sage, discovers an ancient prophecy regarding the Coming of Chaos and propagates it to the peoples of the world. It speaks of a champion who will defend the world from the forces of Chaos in the Drakalor Chain. Hearing of this prophecy, many would-be heroes set out. The player assumes control of one such adventurer.

On a side note, Thomas was floating this around Usenet and the BBS networks for a couple of years before the release date stated above. ISTR messing with a beta version around 1992, and the release being announced in 1994. Picked nits aside, it was a fairly stable code pile, although arguably several years -behind- its time. Had it come out a decade earlier, either as a stand-alone game or a BBS door, it would be remembered as a standard setter.

Not sure if this counts as abandonware, but it's free either way. The project is being resurrected: http://www.ancientdomainsofmystery.com/p/adom.html

One of the best roguelikes ever.

Share your gamer memories, help others to run the game or comment anything you'd like. If you have trouble to run Ancient Domains of Mystery, read the abandonware guide first! 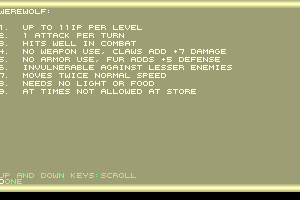 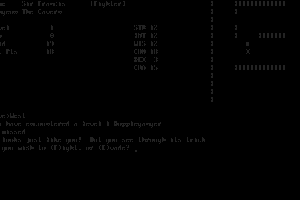