S.C.A.R.A.B. is an innovative mix of shooter and strategy genres that sadly received too little attention than it deserves.

A spiritual descendant of Simutronic's excellent but also underrated CyberStrike, S.C.A.R.A.B. is essentially a giant robot action game, similar to MechWarrior, that offers a unique and refreshing blend of non-action elements that will not be seen again until the likes of Hostile Waters years later.

The game's originality is already evident from its premise that places Egyptian mythology in a futuristic setting. In this alternate reality, Egyptian gods wage war by pitting giant robots against one another. You are not fighting for your own objective, however, but as part of a team. Similar to a children's game, your team wins by maintaining control over half the map for at least five minutes. But here's where it gets tricky: maintaining control is done by covering the map with an energy field, which is powered by towers, which in turn are dropped by a hovering dropship. To make things even more interesting, this same dropship provides all robots with power-up modules you can use to customize the robots. The modules range from straightforward weapon modules to things like the stealth module (which removes you from enemy's radar) that enhance the strategic element. You can even call on the dropship to drop a sarcophagus, a device that repairs damage.

Each of your robots is protected by a "geodesic shield", which is enhanced by the surrounding energy field. Since the geodesic shield limits your field of vision, a crucial choice you have to often make during the game is whether or not to drop your shields to see clearly but make your robot more vulnerable to enemy fire, or keep the shield on but stumble around blindly through the map. To make matters even more complex, each of the three main robot designs has its own strengths, weaknesses, and selection of special weapons. Horus, for example, is the fastest among the three and can be equipped with rocket fuel modules that enable it to fly. The Sekhmet is much slower, but is very durable and can carry mortars and other formidable long-distance weapons. The game's interface is very easy to learn and use. Anyone who has played DOOM will have no trouble here. You can also use the targeting crosshairs to aim at a specific appendage on enemy robots: its arms, for example. The levels, while not as detailed as classics like Hexen, are well designed: full of tunnels, dead ends, and even moving skyways.

As a straightforward FPS, S.C.A.R.A.B. will probably disappoint die-hard DOOM fans who expect nonstop action frenzy and cool deathmatch levels. But as an action/strategy hybrid, S.C.A.R.A.B. is a deep and rich title that requires strategy as much as reflexes to succeed. You will need to place towers intelligently to produce an energy field that covers the optimal area, and knowing when to destroy the enemy's towers (e.g. when their robots are nearby) and when to keep them (e.g. when your own robots are nearby) is crucial. In this sense, S.C.A.R.A.B. is more of a futuristic sport title than a FPS - but it will reward anyone who is patient enough to learn the intricacies. Two thumbs up, way up! 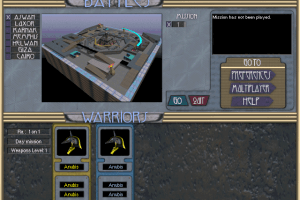 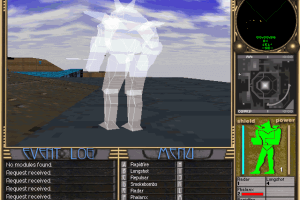 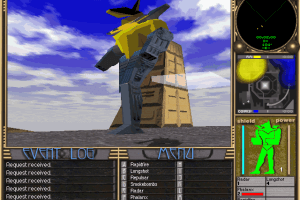 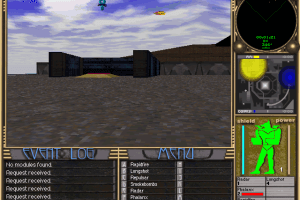 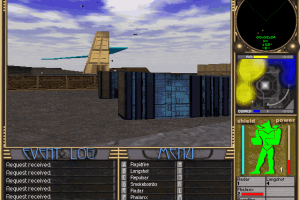 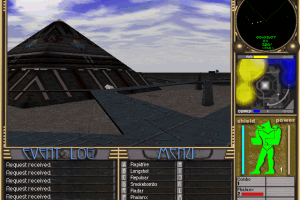 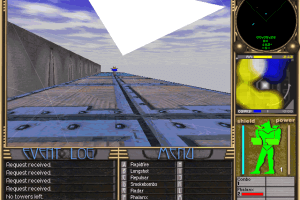 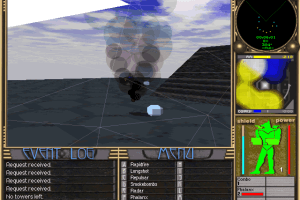 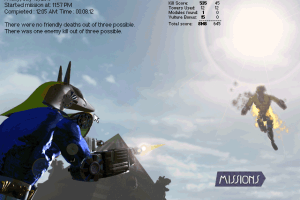 Share your gamer memories, help others to run the game or comment anything you'd like. If you have trouble to run SCARAB (Windows), read the abandonware guide first!