Antarctic Adventure is a very cute and funny game from Konami starring Pentarou the Penguin (who later appears in Konami's Parodius) who must journey across the Antarctic to deliver his fianc้.

The game is played from pseudo 3D, a behind-the-Penguin perspective, as you watch Pentarou jump over pits and avoid walruses and other Antarctic obstacles. First released for the Colecovision, the game is a faithful translation of Konami’s hit arcade game of the same name that was only released in Japan. The gameplay is simple, but it’s the simple charm that will keep you hooked, just as in many other Konami classics. Two thumbs up! 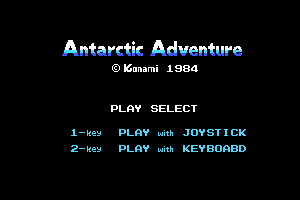 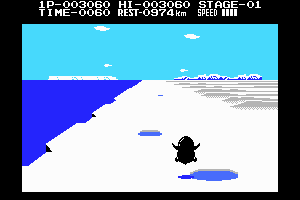 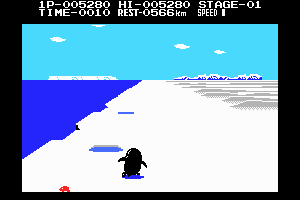 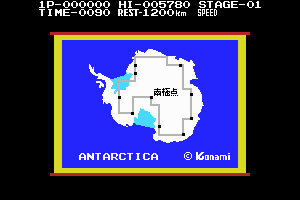 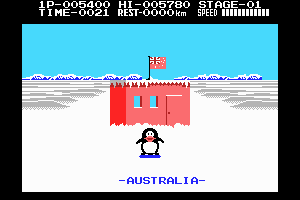 This is not an oficial port and it was not made in 1983. This is a recompiled version of the MSX game made by the russian group FRIENDS, circa 1993.

I didn't tried this version, but as much as i know, this is NOT a native dos game, it's an msx game running in a some sort of an emulator or something like that, That's why it's better, than other games at the time, this came out.

I was playing that game on Pegasus :)

You know as a 1984 ported game looks pretty cool, both the graphic and BGM is ok, especially when you compare to other ported classic nes and md games such as Castlevania, Ghost and Goblin, Contra ( Oh Contra on PC is so shity that is unspeakable), so the game is really a sign that it is not the case PC is not that capable around those year, it is those developer who did shitty port that made PC look bad.

How it's possible that Nintendo's 8-bits games were better than PC's 16-bits.

What's the controls?! I pushed everything and the only key working is Esc!

Awesome, I had no idea there were DOS games by Konami as early as 1983, will definitely have to check this one out

Share your gamer memories, help others to run the game or comment anything you'd like. If you have trouble to run Antarctic Adventure, read the abandonware guide first!