You've Got to Know When to Hold'em

What is the most played computer game ever? Doom? Myst? Quake? Tetris? Pong? What if I told you it was Solitaire? Yup, that's right, a card game! Now, I don't have any facts to back this with but based on my observations, that simple little card game that comes with any flavor of Windows has got to be the most played computer game ever. Why? Because it's been played by just about every computer user in the world. Walk by a bored secretary and what do you see on the screen? Solitaire!

You've Got to Know When to Fold'em

What is the attraction of this simple game on a $2,000 plus machine that could just as easily be played with a $2 deck of cards? Well, of course there is the availability -- it's installed on about 90% of today's computers -- but it is also familiar, quick and simple to play. Serious gamers may scoff at card games and even classic board games such as Scrabble or Othello converted into computerized second cousins but there seems to be a market for these games. Not every computer gamer has the lightning reflexes to score high in today's action games or the desire to submit himself to the emotional drain of a complex adventure game. Then there are the gamers with older computers looking for something that will still run on their systems.

For all of these reasons Sierra brings us Hoyle Poker, part of a series of card games under the famous card deck manufacturer's name. Holye Poker runs on either Windows 95 or 3.1 and has very low systems requirements. A 486-33 with 4 mbs of RAM is all you need for a friendly game of Friday night 5 card stud.

Never Count Your Money While You're Sitting at the Table

As far as card games go, Hoyle Poker is a great game for all skill levels. You can play 24 different varieties of poker against 7 unique animated opponents. It's very good for learning the basics of poker and its many varieties. The game promotes the Friday Night poker game style in which the dealer changes with each hand and the dealer chooses the type of game: 7 card stud, Texas Hold'Em, Omaha Hold'Em, Baseball, Chicago, Wild Card variations, etc. The box even includes the book The Rules of Neighborhood Poker According to Hoyle by Stewart Wolpin which celebrates the varieties of poker and explains in a conversational style the finer points of the weekly poker game.

So unpack the coldcuts, crack open a beer and light up a stogie cause you aren't leaving until you lose you paycheck or clean out the house. In Hoyle Poker, you are stacked against seven (at a time, more players are available plus you can play against a friend via the Internet) spirited stereotypes all with their own corny jokes, egos and style of play. There is the college professor, snobby rich guy, hip dud, bitchy chick, loopy gal and a bulldog among other opponents. The box claims "Bluffing and Attitude" and it does exist. Players all have their own attitudes and bluffing does occur. In the movies, players catch on to a bluff by drop of sweat on a brow or twitch in an eye. Some of these physical "tells" exist in Hoyle Poker but mostly they are hidden within the phrases spoken by the other players. Bluffing works for you, too. If you have a good hand, you need to resist the temptation to raise right away. If you do, you will often cause most of the other players to fold right away. The pot will be much bigger if you trick some of the opponents to come along with you.

How does Hoyle Poker compare to other poker games? The only other computer poker game I've played recently (besides Video Poker) is Golden Nugget. Golden Nugget was more of a total casino simulation but poker had a big part in it. In Golden Nugget, the game play was restricted to Las Vegas rules and the opponents were basically like playing against robots. Hoyle Poker is better with its fully developed characters and their bluffing and attitudes. Hoyle Poker offers a lot of Windows-game type choices to customize the play. You can select the background and the look of the card backs. Who cares, right? Right. Other options include playing a tournament or just waiting until your money runs out. If this happens a trip to the wise-cracking ATM machine will get you back in the game. Internet play is also available if your poker buddies live out of town or if you need the challenge of human luck instead of computer luck. Please, no exchange of money, this is a friendly game of poker.

There Will Be Time Enough for Counting When the Dealing's Done

Other games in the Hoyle series include Classic Games (which also includes a version of poker), Casino (another version of poker include here), Solitaire (includes Poker Square) and Blackjack (no poker here). All in all Holyle Poker is a decent enough game for the price but then again why are you playing with yourself on a Friday night? 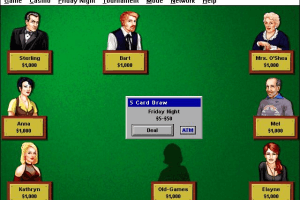 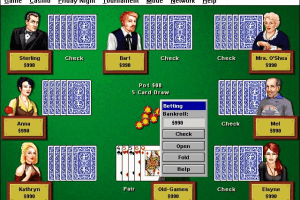 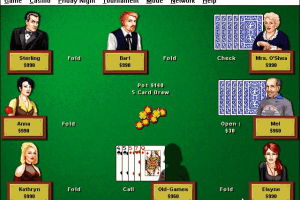 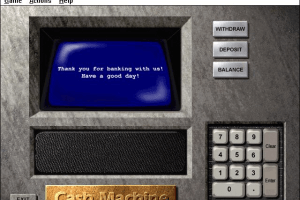 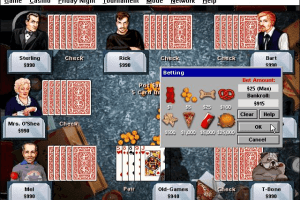 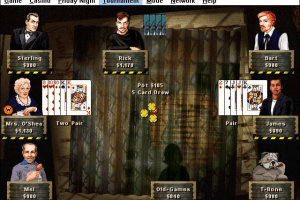 Share your gamer memories, help others to run the game or comment anything you'd like. If you have trouble to run Hoyle Poker (Windows), read the abandonware guide first! 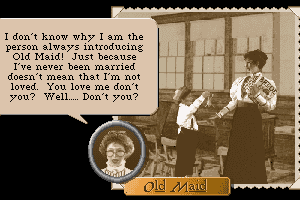 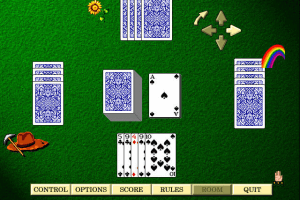 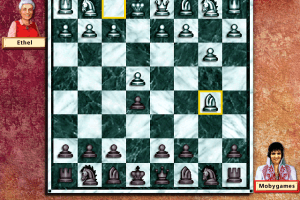 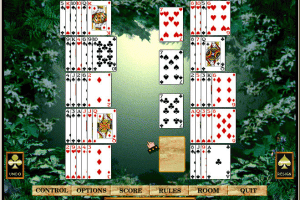 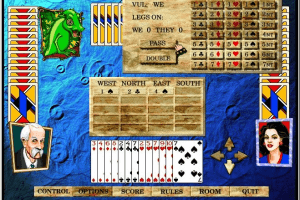 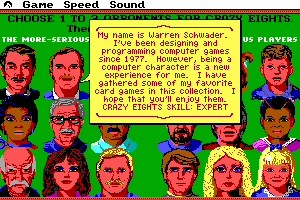