Description of Kingdom Under Fire Windows

The bold claim made by developers Phantagram for their new game Kingdom Under Fire is that it offers a unique blend of action, RTS and RPG, all wrapped up in one bumper-filled fantasy package. The problem with such claims made for the "Throne of the Ultimate Game" by being a jack-of-all-trades, is that it inevitably leads to a product that dilutes certain aspects because of adding others that wouldn't normally be present. One word: Birthright. And so it is with Kingdom Under Fire. That's not to say it's a bad game, but each of the elements - RTS and Action/RPG - are only shadows of the best of breed in their genre.

Kingdom Under Fire does have a story, in fact one each for the human and devil sides in the game's two campaigns. The human side sees you lead a hero character called Curian as he gathers allies to fight the forces of evil led by Rick Blood. As the game progresses, your hero gains experience, collects items and gains abilities, making him all the more powerful as each scenario unfolds. This is one of the game's more endearing features, though it may have been better still if the hero could be more freely developed through a wide variety of skills and attributes, as is the case in Warlords Battlecry. Part of the appeal of the "RPG" character development in a game of this ilk is freedom of choice in that development, and that's rather lacking here, sadly.

Rather than mixing the hero development seamlessly into the RTS aspect a la Battlecry, Kingdom Under Fire instead offers two disjoint styles of play. Each mission will be either RTS or Action/RPG, with no middle ground. The RTS gameplay is very much in the style and flavour of Warcraft 2, with quite a similar blend of resource gathering, unit types, spells and interface options. That means the interface is rather dated; there is no way to queue orders, for example, but the more basic features such as build queues and muster points are present. It also means there isn't a great deal of variety in units, structures and upgrades.

The Action/RPG missions play out like a poor man's Diablo, though you can control up to three heroes in a single mission. The graphics are weaker, the monster variety not so great, and the interface and character traits are comparatively less functional. There are, for example, only ten item slots for each hero, at least half of which will generally be taken up by health, mana and other potions.

One of the snags caused by the storyline being interspersed within the missions is that the player loses control of their hero when a story element unfolds. This is done without warning, and can be very confusing when it happens.

But the most frustrating aspect of Kingdom Under Fire is the lack of an in-mission save. Couple this with the designers' inspirational placement of the tough "boss" enemies at the end of each mission, and you can quickly foresee the potential for your keyboard to go flying out the window after a few frustrating deaths. And worse, the game includes traps, so you can be killed in a twinkle by a rock falling from thin air.

OK, so Diablo had a restricted save system, but at least if you played shrewdly, you didn't end up replaying the same mission over and over to learn the way to win. There is a way around this madness, and that's to lower the game difficulty to easy (which is what the designers recommend), but then the game is just that: too easy. I'd rather be able to save every ten minutes and have a challenge, please.

If you're done with the campaigns, you can play in skirmish mode on any of the myriad of multiplayer maps. The AI is quite capable of putting up a decent fight, but ultimately it's all down to who can crank out the units the fastest, with few options for subtleties or finesse. The online matchup service, via the dedicated Wargate servers, proved fruitless, as when I connected (after the game had been released in the UK) the chat rooms were empty, with not a single opponent to be found. You can play up to 8 players over a LAN though, if you prefer local battles.

It's hard to find individually innovative ideas in the game. Each of the heroes in the game has different powers, and their characters fit well into the campaign storylines. There are some useful options in the RTS gameplay, like being able to place archers in towers. But these things are done with more variety and gusto in Battlecry. Add in limitations such as the low number of units that can be selected at any one time, and one wonders how much Kingdom Under Fire's long development time has hurt its appeal.

Ultimately, the problem with Kingdom Under Fireis that while the combination of RTS and Action/RPG styles may be relatively innovative, the features offered within each are not. In fact they're decidedly weak compared to Warlords Battlecry and Diablo. The storyline is good, but the missing features and the incredulous decision to omit an in-mission save game option combine to leave a feeling of frustration rather than satisfaction. Multiplayer options are also limited given the absence of life on the Wargate servers. The game concept is good, but the implementation unfortunately falls rather flat. 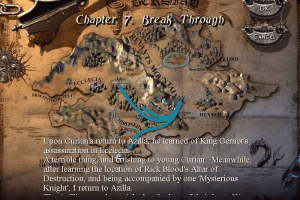 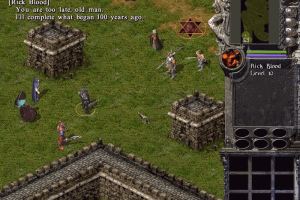 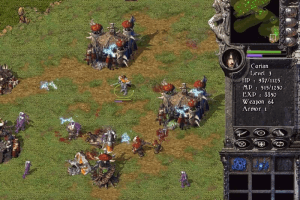 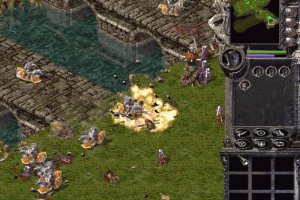 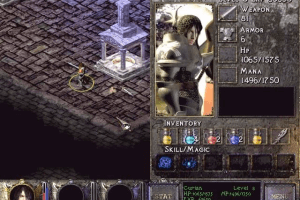 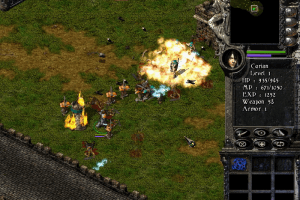 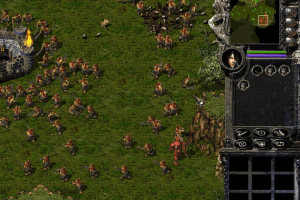 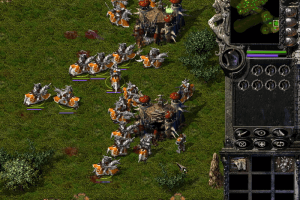 Very, very, very and very... Underrated gem! In my opinion, this game is best RTS+RPG for all time! If you reader this, downloader now and enjoy!

Note: This site is a relique! Thanks for all classics games guys! =D \o/ ^^

Share your gamer memories, help others to run the game or comment anything you'd like. If you have trouble to run Kingdom Under Fire (Windows), read the abandonware guide first!