Description of Swords of Glass

One of the few truly revolutionary RPGs, Swords of Glass is a wonderful first-person dungeon romp that was way ahead of its time (1986).

The excellent review at a fan page says it all about what makes this game an overlooked classic: "In Swords of Glass you play either a warrior or a magician who is searching through a deep dungeon for the legendary Sword of Glass. I know the story sucks, but don't let that keep you from playing. Remember that this game was made in 1986. Not only did it allow 3-D dungeons in color, but it also had multi-player split- screen! This was a time when even action games hardly allowed multi-player, let alone split-screen multi-player RPG's. Also, weapons and armor would degrade over time, and you could upgrade them giving +1, +2, etc. There are also plenty of spells with various effects. The game was just filled with cool stuff that you couldn't find anywhere at that time is history.

After you create a character, you then would go into the store and buy weapons and armor for your journey into the dungeon. Afterwards, you entered the dungeon and fought evil monsters to the death and picked up treasure chests along the way. After a little fighting, you would return to the stairway and leave the dungeon. Then, you would go to the store again, sell your spoils, and buy better equipment. That's pretty much how the game went for a long time.

In the dungeon is a stairway down to the lower dungeon. If I recall, there are about 16 dungeon levels. And the Sword of Glass is somewhere on the last level. You will spend weeks of constant playing to get a character that powerful, and the reward is very little. A simple you win, was all there was. Still, the game took countless hours of my childhood away from me, and I'm still glad I played this game."

Wizardry this ain't, but it is still well worth your time if you are fan of computer RPGs. Too bad the split-screen multiplayer idea has not been popularized. This game was included in Keypunch's Swords and Sorcery compilation (probably illegally, since Keypunch was notorious for selling games to which they didn't own copyright - hence no mention of designer/programmer anywhere in the game), and is easily the best game of the bunch. Two thumbs up! 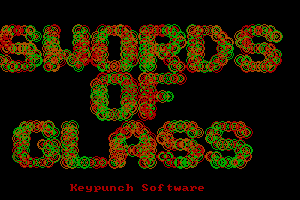 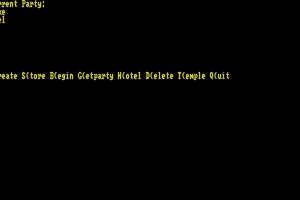 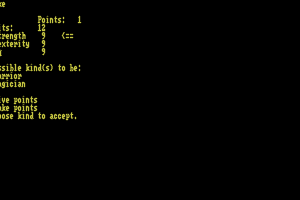 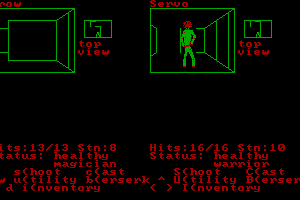 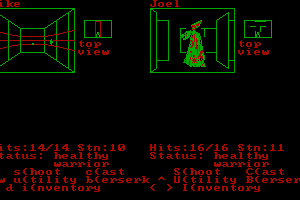 This came about after one of the Apple ][ mags published a bunch of code routines that generated random maps and drew them in first-person. They were Apple Basic ports of P-System code that many suspected were lifted from the code for Wizardry I - If you had the P-System interpreter set, then you could access Sir-Tech's code. Since so few users had the P-System set for either the Apple ][ or the IBM, Sir-Tech didn't bother doing any copyright or access protection on the interpreted source code. IIRC, they didn't get wise to this until Wiz IV, which by then had been rewritten so it could be compiled before release.

Not as fun as Wizardry, but still good for an hour or so of dungeon delving if you're bored.

Share your gamer memories, help others to run the game or comment anything you'd like. If you have trouble to run Swords of Glass, read the abandonware guide first!