Description of The IBM Basic Quiz

Another excellent ASCII game by Scott Miller of Apogee game, IBM Basic Quiz was included on Softdisk's "Big Blue Disk" number 28. Here's a summary of plot and gameplay from the game's instructions, which includes a nice synopsis of the history of BASIC computer language:

Beginners' All-purpose Symbolic Instruction Code -- known better by its acronym BASIC -- was devised back in the 1960s for use on the Dartmouth time-sharing system by students. It rapidly became a popular language for educational computing on mainframes; and, when microcomputers came along in the mid 1970's, BASIC was the language included with just about all computers (or at least those which were more advanced than the early hobbyist kits where the owners would toggle in programs in binary using switches on the front panel).

Since then, BASIC has been attacked mercilessly by programming purists for what they consider its encouragement of non-structured, messy programming style. Pascal is generally preferred for educational use -- though, as a compiled language, it doesn't have the "instant gratification" of interpreted BASIC, which lets you type in a command and see it executed right away. There are others who are advocates of COMAL, a language with Pascal-like syntax but BASIC-like immediacy; this language is standard in the schools in some European countries, but has never caught on in the United States.

But, like it or not, BASIC is still the most widely-available language for micros (remember this was 1988, folks); and it is the language most novices who wish to begin programming their PC's must learn. BASIC compilers, such as Microsoft QuickBASIC, bring BASIC into the realm of professional programming -- although at the cost of sacrificing the immediacy of the BASIC interpreter. (ZBASIC combines some elements of both; the immediacy of an interpreter and the speed of a compiler.) This quiz tests your knowledge of BASIC. In particular, it centers on BASICA (or GW-BASIC), the form of BASIC used on IBM PC's and compatibles. This is a Microsoft BASIC, the descendant of the original Altair BASIC that gave Bill Gates his start in the software field in 1975, when he was still a college student. The first Microsoft BASIC spawned later versions for: CP/M; the Apple II (Applesoft); the Commodore Pet, 64, and 128; and the Macintosh. However, the IBM-and-clone version proved the most popular, riding on the coattails of another successful Microsoft product, MS-DOS.

Try BASIC Quiz to see if you're a PC BASIC wizard, or if you can stand to learn a few things from more grizzled "hackers." If you like trivia games, then this will be right up your alley. As always, Scott Miller has a knack for making seemingly banal or commonplace concepts seem interesting, and there's no exception with his trivia games. The questions are all interesting or entertaining or both, and you are guaranteed to learn something new by the time you are done ;)

There is no time limit, and with 100 questions, it will take at least a few hours to finish the game. Try all three games in his trivia series (Computer Quiz, IBM Basic Quiz, and Astronomy Quiz) -- they come highly recommended. 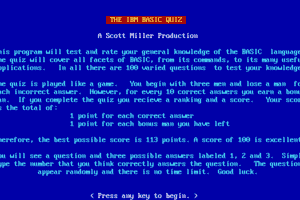 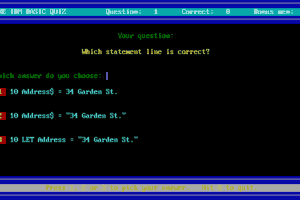 Share your gamer memories, help others to run the game or comment anything you'd like. If you have trouble to run The IBM Basic Quiz, read the abandonware guide first! 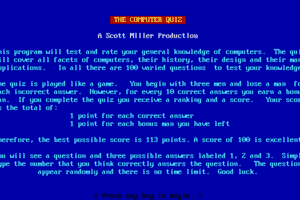 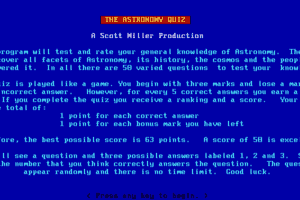 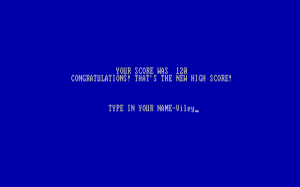 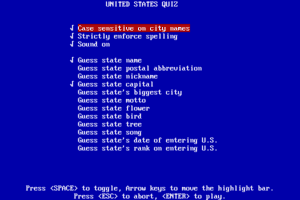 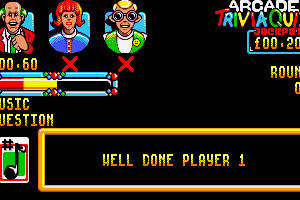