Exactly what drug WAS that?

One of the great mysteries of the Internet will be, what drugs were the Tribal Rage PR folks taking the day they came up with the idea to spam the newsgroup with a flood of cheap and silly advertisements (posts that largely catered to the lowest denominator using sexual innuendoes)? Definitely not the kind of move you'd expect from the folks who bring you the kind of quality games Talonsoft is known for. However, Tribal Rage is a definite departure from their quintessential offerings, and their first foray into the realtime strategy realm.

I suspect that the sleazy approach to its marketing has probably been this game's greatest disservice. It is not, as I had started to suspect, a blasé me-too realtime strategy game whose lone appeal would be its gratuitous amounts of computer generated ti...ahem...well, that's enough of that. Surprisingly, what I did find was an enjoyable, albeit flawed, title. The game actually has hidden qualities that are unique and interesting twists to a saturated genre.

The storyline of Tribal Rage is solid tongue-in-cheek affair. In a post-apocalyptic world, mankind struggles to survive; that is, survive a campy story feel straight out of Redneck Rampage. The remnants of humanity have splintered into radical factions, these tribes struggle over the remaining resources that are scattered across the wastelands. Your job is to lead one of these tribes into dominating the remaining resources of the lands once known as southern California.

There are seven tribes (six of them available to the player) struggling for control of the land's sunny state. The tribes each have their own identities, advantages and disadvantages; fortunately for us, the differences are not limited solely to their backstory or philosophies. Each of the tribe's play differently and have their own unique types of units and technologies to utilize. This diversity and the uniqueness of the tribes (and customizability of your forces) are what really becomes Tribal Rage's real strength.

Amazon- Women of the World unite! And ride Dinosaurs (genetically engineered of course), and Kick Arse (of course)! They are also blessed with the ability to convert woman from other tribes to their cause. Big and beautiful but a little too fond of those axes. |

Biker- Easy Rider meets the Terminator. This group is not your weekend recreational gathering of bikers! Hard core and hard as..Er...headed (yea, that's it)! This Tribe wanders the wastelands burning, pillaging, and generally being a group of unpleasant fellows. |

Cyborgs- Half-human, half-machine, and all deadly. These two-footed juggernauts can take a licking and keep on blasting with their destructive fusion weapons. These living war machines are best given a wide berth, barring that dismantled with extreme prejudice. |

Death cultists- A bit peeved that the Apocalypse failed to bring the final Armageddon, these fanatics are doing their best to finish the job. Armed up to the gills with weapons to speed the world to a speedy demise. From the neutron bomb, and nuclear mines, to toxic grenades its obvious how serious the Death Cultists take their religion. |

Enforcers- The Enforcers are the remaining remnants of Law in the lawless wastelands. However this tribe of marauding mercenaries motives are extremely suspect. Armed with the most sophisticated weaponry available no one really argues the point with them though. |

Trailer Trash- Separatists, Survivalist. Revivalists of the king of rock and roll (uh huh uh huh). Whatever you chose to call this tribe of trailer trash, they are deadly and mean business. Beware their suicide 'Exploding Pig' warrior, if it gets too close you could be picking up bits and pieces of what was once your army. |

Civilians- There are pockets of civilian population still in the wildlands. Determined but outgunned these last visages of humanity struggle to hold on to the life they once had. This tribe is not available to players and lacks any of the special abilities native to the other tribes. However, beware their lobbyist, who can play havoc with your forces if you're not careful.

Tribal Rage has all the classical elements popular to the current trend in realtime strategy gaming, resource management, building of units, structures, and research of new technologies. However, it's Tribal Rage's execution and applied twists to these classic elements that make it interesting.

The Thrill of Auto Duel

Basically there are two types of units in the game, Vehicle and Warrior units. Despite that a number of units come pre-configured, the games real strength is that it allows you to 'build' units to your own specification. The range of possible unique units are impressive as the mix varies, depending on your tribe and what technologies you have researched. The range of vehicle and Warrior class bases also come with their own initial base stats, from there the fun is that you can customize them by adding modules.

The modules are broken up into two types, weapons and equipment. Equipment ranges from sensor turret, heavy vehicle chassises, and super power charges for vehicles. While Warriors can load up on a range of items from cloaks, personal shields, and armor. The impressive thing is, the complete lists for these modules are quite huge and offer players of each tribe quite a variety. The thing that struck me as I created new units was that the game reminded me of an old favorite boardgame I played, called Steve Jackson's Car Wars. Many modules like light and heavy chassis super powerplants and oil dropper all sent me reeling back in nostalgia. The game even models limited slots (accounting for space restrictions), weight limits, and acceleration factors, much like the board game did (just in case you thought I was talking about that pitiful attempt to the PC in 1990).

The list of weapon modules is equally as impressive and even has a wide array of effects. Attack types vary from explosive, heat, energy, radiation, etc. The weapons also shoot at a range of speeds, range capabilities, and damage. They also (usually) have limited ammo, which requires the player to monitor units and reload them at supply stations when needed.

The game also allows units to gain experience. Units progress through four levels of experience before they can become heroes. Heroes are a lot tougher and more dangerous. Admittedly, this did make the game a little more micro-management oriented regarding units, but I also found myself becoming more attached to them. Indeed the desire to "tank rush" an opponent is at least partially derailed when you might lose a hero or a unit you're trying to build up to that status.

The campaign itself perpetuated the unit preservation mentality, as units could be carried over from battle to battle. The campaign elements were very reminiscent of Dune 2, which was before developers thought realtime strategy required generous helpings of puzzle elements. Tribal Rage embraces Dune's forgotten concept and allows the player to choose the next sector for attack (or defense) from a campaign map grid. Units can also be moved around from sector to sector, and best of all not ONE of the maps was a pseudo puzzle. A unique element to the campaign aspect of the game was that time slowly advanced as you contemplated your next move on the campaign map. If you walked away during this time sectors with working mines would continue to gather resources and enemies might counter attack one of your sectors. In fact the game would even allow you to revisit conquered maps so you could deploy mines on idle resources missed previously and even gather up cache goodies that might still be littering the ground!

My only real complaint about this aspect is that the manner of moving units from sector to sector was tedious. To move units required entering the zone of the units desired and then highlighting them (12 is the maximum number of units that can be selected at one time, ugh... Warcraft curse you!). You then had to immediately exit the map, and THEN click on the arrow of the sector you wanted them to move into. This could turn into a frustrating exercise, especially when you have no idea what units are in a sector (if you're looking for one in specific) until you enter it. Even then you would usually end up scrolling around the map to find the units you want, one by bloody one.

The rage of resource and research!

Resource management in the campaign is simple. Money is gathered in one of two ways, build (or capture) a working mine, or pick up money caches off the ground. The starting money when entering a new sector is determined by the total amount of your money divided by the number of sectors you have. Pumping up your starting funds is possible on hostile maps, but ultimately turns into a time consuming chore of revisiting conquered sectors and tapping idle mines.

The research aspect is the most simplified aspect of this game. Pick the technology that interests you on a list; pay the cost, and its yours! However you can save yourself a few pennies by picking up the caches of equipment that litter a battlefield. Once picked up this technology becomes available and saves a few precious coins from your coffers.

I admit I found multiplayer in Tribal Rage surprisingly enjoyable. It also emphasized the obvious weakness in the AI. A quick game among friends to get a feel for play quickly turned pretty crazy when stealth units were letting nukes fly and bribes were converting enemy forces over. The ability to come up with unusual combinations of units and tactics with tribes is superbly diversified for multiplayer gaming. Now in regards to the editor, I loaded it up and browsed, but wasn't grabbed due to the lack of creating my own campaigns.

The Cybernetic 'achilles heel' of Tribal Rage is the bugs. I really didn't have a lot of crashes, but graphic glitches were almost enough to make me sigh. Talonsoft also confirmed what gamers using the AWE series of SoundBlaster's already knew, if you have the AWE you're likely having problems. I also ran into a little beauty of a bug that abruptly turned my tribe into the civilian NPC tribe. Which I'm sure someone would try to call a undocumented feature, except that the missions turn into you being on the maps by yourself. Cancel the game and the computer score showed that you were facing yourself. I also found the pathfinding AI pretty weak. The campaign AI was also a push over for the most part (except at the highest difficulties). This game could have definitely benefited from some more QA!

QA problems and lame advertising aside the game was enjoyable. The game even stands out from its competition; I'd probably have even considered giving it a silver award, if the QA had been tighter. As it is, the game is a fun but flawed entry into the genres market. It has some very innovative variations on the realtime strategy genre; it also has some odd design shortcomings. Realtime strategy fans that like campy humor and an open ended feel to their games will find a lot to like about Tribal Rage, especially if you like a deeper strategy element without the usual pitfalls of puzzle ingredients being force fed to you. 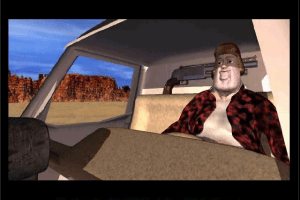 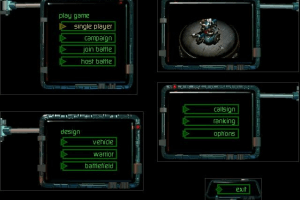 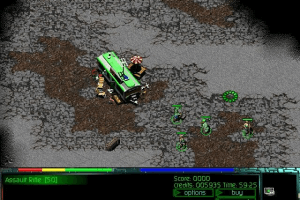 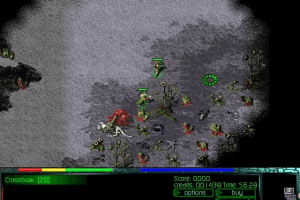 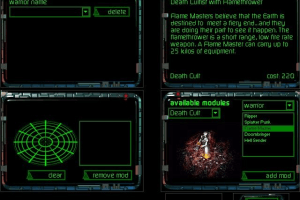 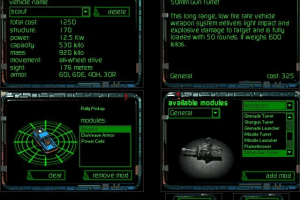 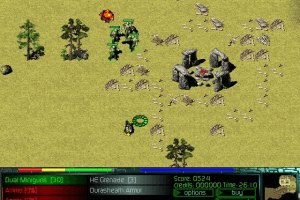 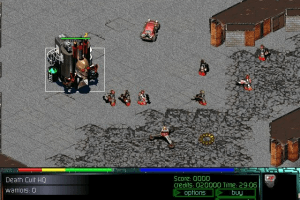 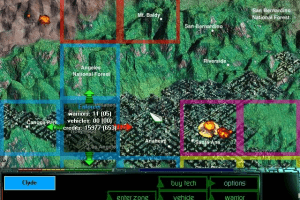 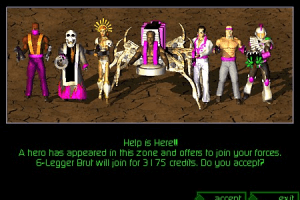 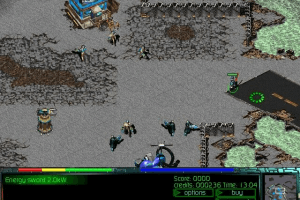 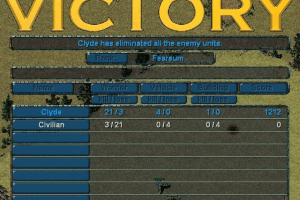 Share your gamer memories, help others to run the game or comment anything you'd like. If you have trouble to run Tribal Rage (Windows), read the abandonware guide first!