Description of Attack on Altair

Probably the rarest game from Windmill Software, maker of Digger, Attack on Altair is a shooter game that is entirely text-based -and not a very good one, at that. If you have played Space Invaders and its clones, you know what to expect here.

It's a bit similar to IBM Attack, another very old shooter-except here the objective is the much more mundane kill-aliens-to-save-the-galaxy affair. Action takes place on the surface of planet Altair, but without any real graphics it's just too difficult making out the targets ;)

Worth a try just to see what Windmill's early days are like-before you put it down and play the timeless Digger instead. 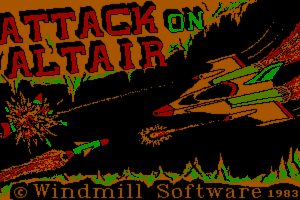 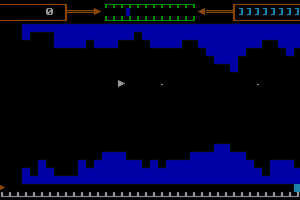 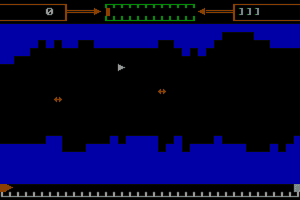 I think the reviewer is being a bit harsh here. I played this game to death when I was a kid so I may be a bit biased in favour of it. Yeah, the graphics are about as basic as it gets - text-based and not a huge amount of variety. The simple graphics, though, hide a surprisingly difficult and addictive game.

Altair is a side scrolling shooter where the player's spaceship (a triangle) navigates through a cavern while under attack from hostile forces. The player begins with eight "shields" and lose one with every collision with an enemy or the cavern walls. An extra shield is gained every 10K. Unlike a lot of other games in this genre, there are no power ups of any kind making the late game very challenging. The title screen implies that the enemies are missiles sent from an unknown source (more on that later...).

WARNING: Spoilers(???)
Initially the enemy missiles come at the player head-on relatively slowly and and are easy to dodge and shoot. The cavern narrows in places making the game more difficult. Just when you think you're getting the hang of the challenge a new type of missile emerges that attacks at twice the speed. Then, it gets even worse. The next enemy is hard to describe. They rapidly bounce in place from the floor to ceiling and, when shot, explode in both directions with a randomly spreading shockwave that cannot be dodged. Sometimes the ship is hit, other times, not. The best bet is to avoid shooting them and try to weave through. These things always gave me the most trouble because the enemy missiles will occasionally crash into them also causing the explosion. As if this wasn't bad enough, it is not long after the "bouncers" that new enemies appear. More missiles, but this time, attacking from behind. The only option is to dodge and shoot them as they pass. The final wave consists of the faster missiles also attacking from behind.

A progress bar at the bottom offers huge motivation to play and replay. Is anything at the end? As it turns out, there is. This is one of few games that I can think of from the early era of PC games with an actual boss-battle. It's a large eye-of-sauron type structure that shoots an instant-death laser. Shoot the thing in the eye and reap that sweet karma and the envy of all your friends.

I can't emphasise enough how satisfying it was for me, as a young pup, to play a game with a definite ending, a boss, a "win condition". "Altair" differs from the other Windmill games in this respect and many other PC games of this vintage. Their flagship game, "Digger", which deserves its accolades, falls short in this respect. I can still remember the day I finally beat level 9 on Digger, only to be sent back to level 6 with faster enemies.

Maybe it's just my nostalgia, but I really enjoyed this game back in the 80s and I am stoked to get it working again!

As one other reviewer mentioned: if you are running this in DosBox you need to change the graphics away from the default VGA. I set mine on CGA and got it working that way. Also, you will need to crank the cycles waaaay down.

If you've read this far then I salute you and will give you one last tip. "F1" is the shoot key as it is for all the Windmill games I know of. Funny story - we played this game as kids for months without knowing it was possible to even shoot. I guess we figured the games were games where you just had to dodge. One day I was playing (this, or Digger, or Moon bugs) one of the games while my brother was being a twit and pushing random keys to annoy me. We froze, then stared at each other, as a bullet traced across the screen with the accompanying *blip* sound effect. It was like a gateway opening into a deeper, more foreboding dungeon. Great times!

Thank you, My Abandonware!

If you have trouble running this game chang graphics mode in DOSBox to Tandy.

Share your gamer memories, help others to run the game or comment anything you'd like. If you have trouble to run Attack on Altair, read the abandonware guide first!