Genocide 2: Master of the Dark Communion

Description of Genocide 2: Master of the Dark Communion

This old Korean DOS game from 1995, called Genocide 2: Master of the Dark Communion by Zoom Inc, was originally developed for the Sharp X68000 computer system and a sequel to Genocide, a sci-fi side-scrolling hack-and-slash game, that was later ported to FM Towns in 1993.

A Korean company called Mantra later ported this game to MS-DOS based on the FM Towns version with remixed music.

How to play Genocide 2: Master of the Dark Communion 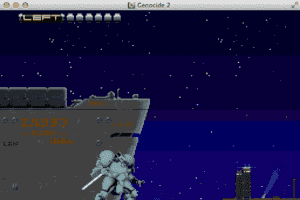 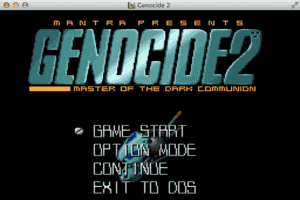 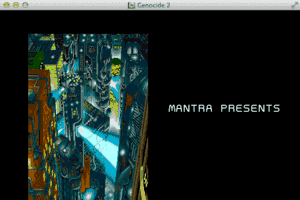 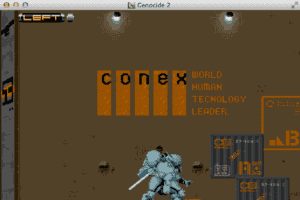 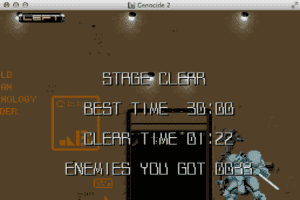 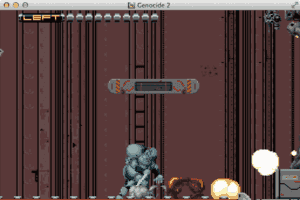 I'm Looking For Another Game Named Genocide.It Is A Shooting Game In Which The Player Has To Escape A Prison In The Near Future.I Can't Find It ON The Internet Can Someone Help Me?

Since updating the old packing isn't happening anytime soon, I'll post the links for the updated packages here and a forum post on how to navigate the joystick set-up for Genocide 2: Master of the Dark Communion for DOS here.

There's already a readme file in the package that tells everything you needed to run the game.

Well I did take the screenshots in DOSBox (Boxer). Ignore the _MACOSX folder. I mounted the bin/cue image with Deamon tools, then mounted the CD in DOSBox. Installed it, ran just fine.

What is this??? Is it for DOS? Or what? What language is it? How you can install or run this?

Just because the downloaded zip is containg _MACOSX folder and a bunch of .DS_Store files. If it is the DOS version, WHY it contains those files?
Not to mention, if you unpack the zip, there is a bunch of EXE files, and even an ISO file (in BIN-CUE format), and there is a GAME.BAT file that contains lines that try to run some progrmas THAT DOESN'T EVEN EXISTS!
And WHY it contains a DOSBOX executable?

First I run the SETUP exe, because I think maybe you need install the game first.
But thats not that simple at all,I need messing around with DOSBox, to manage it to run! And what i see??? HIEROGLIFS! Defenetly Korean...
So it is impossible to setup, install -or whatever- this porgram, unless you are korean and understand that hieroglifs.

I think Im an expert DOS and DOSBox user, I have PC since 1990, and play old games with DOSBox since it was needed to run old games. I run into millions of problems with old games,and most of the time I managed to run it.
But I failed with this. Maybe the whole package is broken!

So, can someone tell me the answers to my questions, and write instructions how to install, run this game?

I've sent an e-mail a while back and you never responded. I need to update the game download because I can make it much smaller than 560MB.

Please excuse the typo I made in the G2_Readme I made while putting this upload together.

Share your gamer memories, help others to run the game or comment anything you'd like. If you have trouble to run Genocide 2: Master of the Dark Communion, read the abandonware guide first! 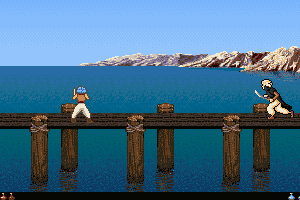