Mychess was developed by David Kittinger. Anyone who's not a fan of chess may not know that David is among the best computer chess designers today. After Mychess and its sequel, he developed the popular Chessmaster series for Software Toolworks, and Wchess, one of the most celebrated computer chess programs ever created (and the engine behind Sierra's Power Chess).

So what kind of chess does this 10+ year-old game play? Very challenging one, indeed. The game's hallmark is the strong computer opponent. There are nine difficulty levels, the lowest three of which will not prove too difficult for anyone who has played in some amateur tournaments. But at the six higher levels, Mychess provides a real challenge for seasoned players.

The game lacks mouse support (not surprising, given its age -- PC mouse wasn't even made in 1979!), so you have to move pieces using standard chess notations. This is not cumbersome, though, and the game even offers instant printout of move history on your printer. The graphics are amazingly crisp for 1979 -- the pieces in hi-res black & white look much better than many later games.

Overall, Mychess is a must-have for every chess player. It's not just a real "oldie" with historical value -- it plays a mean game of chess. Two thumbs up! 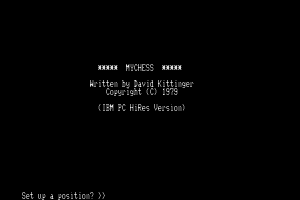 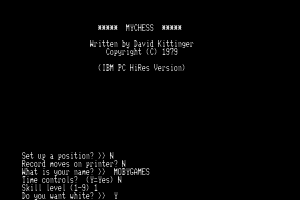 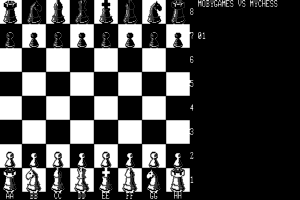 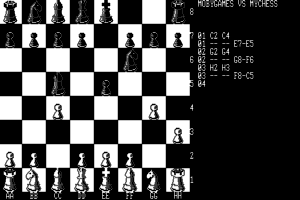 The proto Chessmaster! Mychess was originally developed for and ran under CP/M, hence 1979, at which point MS-DOS did not exist. The version here is basically a 1984 MS-DOS port of the CP/M version, with added graphics. The features and the engine is basically the same.

Mychess was later followed up by Mychess II for a number of 8-bit computers, which basically played the same but had more features. Then it went through a major overhaul and was released as Chessmaster 2000. David Kittinger also went on to produce a number of chess engines for successful computer chess programs and dedicated chess computers.

You can set up a position or set up a game from scratch. You can choose engine strength by limiting number of plies, or by setting a time control. Games can also be printed. There is a rudimentary load/save feature. Game scores can be printed to a printer.

The engine plays a surprisingly competent game of chess, and can certainly measure up against strong early 80s chess programs. Rules of chess are mostly observed, such as castling, promotions and draws, with a few quirks. One quirk is that you are only allowed to promote to a piece that has earlier been taken off the board. So if your queen is still alive, you can't promote to a second queen.

I have also had some issues with the program freezing under MS-DOS. These freezes are reproducable by replaying the exact same games over again: Mychess always freezes at the same moves. Possibly a problem in the MS-DOS port, I have not observed this issue in any of the CP/M versions.

In the following example, Mychess beats White Knight Mk11 for BBC, the accolade winning 1983 precursor to the Colossus chess programs. White Knight thinking at 2 minutes per move, Mychess playing at level 4. White Knight finds itself two pawns down in the endgame, and is duly mated.

In the following example I play against the CP/M version. The computer makes no glaring blunders, but I am able to build up an attack on the kingside and sacrifice a rook to break through.

Share your gamer memories, help others to run the game or comment anything you'd like. If you have trouble to run Mychess, read the abandonware guide first! 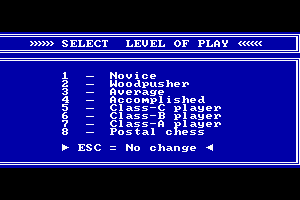 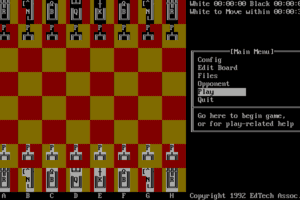 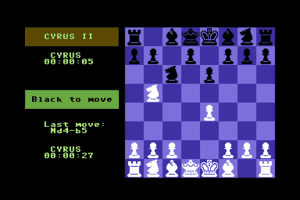 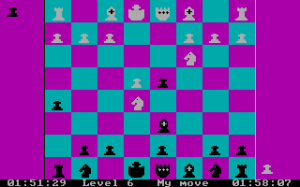