One of the best games ever made in any genre, RobotWar is a strategy/puzzle/simulation hybrid masterpiece by Silas Warner, creator of Castle Wolfenstein for MUSE Software.

The game is best described as a cross between two later games: Origin’s OMEGA and Maxis’ RoboSport: your task is to design robots, and program them to win fights in the arena. Using a language similar to BASICA, the game offers a surprisingly large number of commands you can use, a wide variety of robots, and plenty of play and replay value. The game interface takes some getting used to, but the learning curve is not unreasonable, and the manual lays out basic concepts very clearly. The bottom line is, if you love programming robots, or find OMEGA a bit too complex, RobotWar is a must-have. An entrant in CGW’s prestigious list of 150 Best Games of All Time, and deservedly so. And if you like the game, be sure to check out CogniToy’s modern spiritual successor, MindRover: The Europa Project. 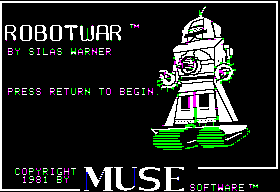 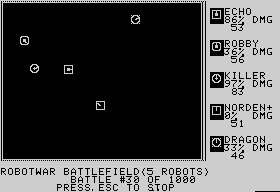 Yes, at a time we had only dos games that's why. I updated the game description, it's now an apple 2 game. Emulator stays in archive.

This archive contains APPLEWIN.EXE , an ApPLe ][ emulator which runs a disk image of the game... ;(

Share your gamer memories, help others to run the game or comment anything you'd like. If you have trouble to run Robot War (Apple II), read the abandonware guide first! 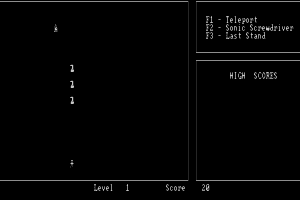