The game has been largely ignored by gamers and remains relatively unknown, perhaps owing to the lack of marketing, as well as the fact that it is more complicated than the Deer Hunter franchise, yet most serious gamers may have assumed it is just "another simplistic hunting game." The truth, fortunately for us, is that Shark! is a realistic simulation that is also captivating and a lot of fun. Gone Gold's detailed review in which the game was awarded "Gold Nugget" says it all: "Shark: Hunting the Great White is a bargain title... meant to sit on the shelf alongside the Deer Hunters of the world. Unlike the Deer Hunters of the world, however, Shark is actually a good deal of fun. You take the role of a professional shark hunter (read: crazy person), and as the game progresses, you are hired by people with shark problems. Off you go into the ocean, you kill the shark, and the beach or whatever is safe again. If you're imaging a sort of nautical Wing Commander Privateer, you're rather off base. The "Career" mode of Shark is a linear progression from beginning to end. As you complete missions, new technology becomes available to you, but you don't actually have any money - you just pick what you want. The obvious choice, therefore, is to pick the best of everything. There's only one issue of preference in the equipment phase: do you want a ranged weapon like a speargun that shoots poisonous darts so you can smite the beast from afar, or do you want a close-up weapon like a bangstick that pumps a shotgun shell into the shark but requires that you be literally touching it? The latter kills the shark a lot more quickly, but of course anyone who gets that close to a shark in the first place should have his head examined. I stuck with the speargun. Other than that, you can upgrade to bigger air tanks, better wetsuits, and improved fins to increase your mobility. You will never, however, be as comfortable underwater as the shark is. Therein lies the challenge of the game: the shark lives down there, but it has a brain the size of a BB. You are a stranger in a strange land, but you can survive if you use your wits, cunning, and speargun. The "Random Mission" mode is just that: you get placed in a random watery location with a random shark and you've got to kill it. It's excellent for practice, but lacks the progression of the career mode. As you probably imagined, the career mode starts you out with small, friendly sharks in clear, shallow water and moves you up until you finally face the thought-to-be-extinct Charcharadon Megaladon, a ninety-foot monstrosity that, as Matt Hooper remarks in the novel Jaws, is "like a locomotive with a mouth full of butcher knives." Gameplay-wise, the designers of Shark appear to have spent a lot of time watching Discovery Channel shark specials. Sharks and other fish move languidly and easily through the water, mocking your slow clumsiness. One of the interesting things about Shark is that though there may be two dozen sharks in the water with you, some dangerous, some not, you've usually been sent to kill a SPECIFIC shark. Don't worry about telling it apart from the others: it's the one streaking toward you, jaws agape.

A Shark-opedia supplied in the menu gives a brief rundown of the sharks you can expect to encounter in the game, and it's important for several reasons. First, it's educational, which is always nice. Secondly you're going to have to get pretty good at identifying sharks so you don't waste a harpoon on the friendly ones. Varying levels of aggression are also listed, and the game sticks to them: Lemon and Mako sharks, for example, will generally leave you alone if you do the same; savage Tiger and Bull sharks will attack you even if they're not hungry. The levels, such as they are, are pretty well thought out and designed with a flair for originality. Level One's California beach is just that: a sandy, minimal-seaweed, sun-dappled bottom with few fish and fewer physical obstacles. You can poke your head above water and see the shore, the pier, boats off in the distance - there are even little droplets of water on your diving mask which run downward when you surface. It's little things like this that separate a crappy bargain game from a good bargain game. [In] the first six levels there are secrets that, if found, unlock special equipment for later missions. The secrets run the gamut from the exciting (treasure chests and lost idols) to the sad and gruesome (diver's corpse crushed beneath collapsed boat timbers), but they're hard to find and encourage you to explore the level a little bit rather than just making a beeline for the shark.

When you approach the shark (or vice versa) your "shark sensor" alerts you to the predator's imminent appearance on the scene. Rather than some ridiculous piece of nonexistent technology, the "shark sensor" is in fact your heartbeat. Its pounding grows more and more terrified and frantic as the shark approaches, until it finally stops when it eats you. I like that. Your compass, depth meter, and available air take up residence opposite your "shark sensor," and you have to keep an eye on all of them.

If you run low on air, or if you're badly hurt, you'll want to surface and head back to the boat for a breather and re-supply - so you'd better remember where you parked the boat, and you'd better be near enough to the surface that you don't drown before you make it. Surface conditions, too, can affect your gameplay. If it's raining or foggy on the surface, visibility is rotten and it's that much harder to find the boat.I really liked Shark, for all that I am repulsed and horrified by the very concept of a game that requires me to touch slimy things and risk consumption by a giant fish. My only complaint about it is that there wasn't enough. A determined sharker can finish the Career mode in a day, and once you're done, there's little reason to go back unless you feel the urge to find some treasure you missed the first time around. It's a simple game, and I can't slam it too hard for not being the ode to depth and complexity that I wish it was, but I'm vaguely disappointed all the same since I think a game based on this concept could be much more exciting if its production values were higher. That said, I'm not certain hardcore gamers would buy it, while I'm confident that it will do quite well on the bargain shelf." 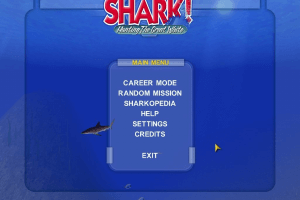 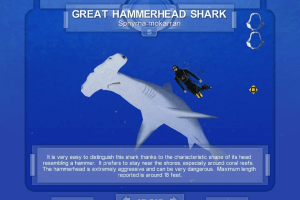 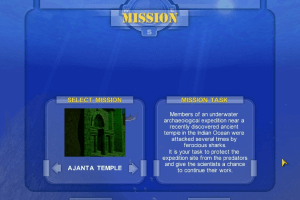 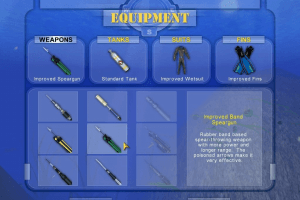 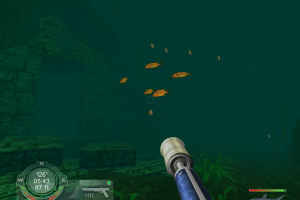 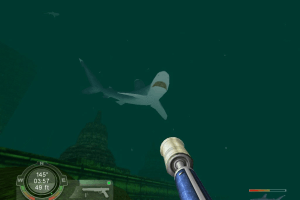 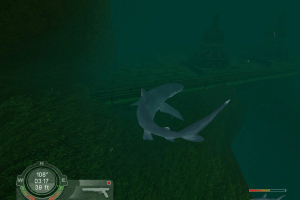 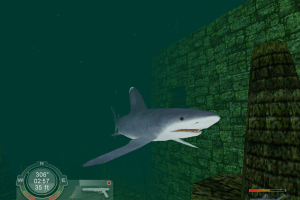 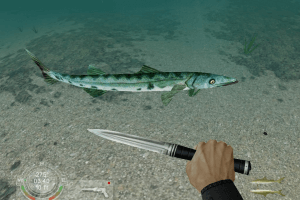 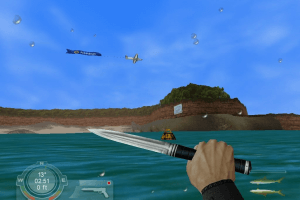 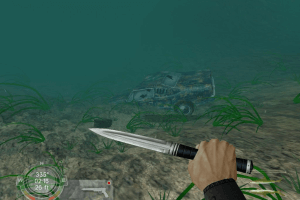 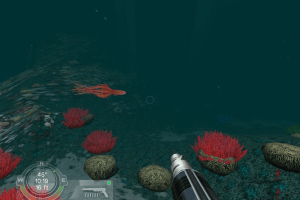 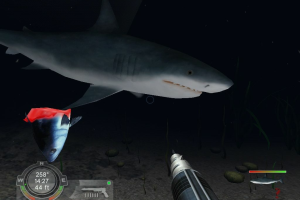 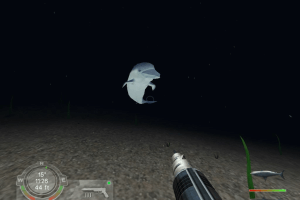 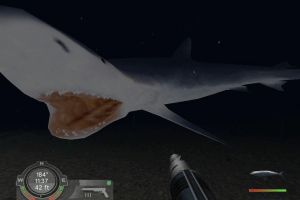 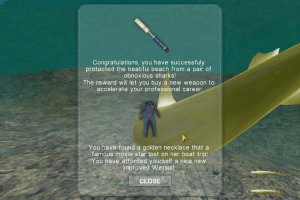 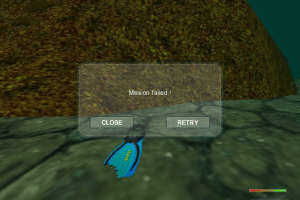 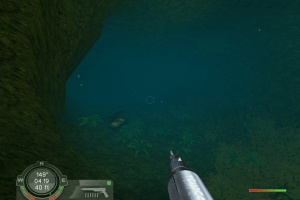 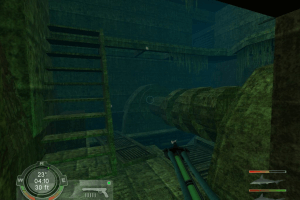 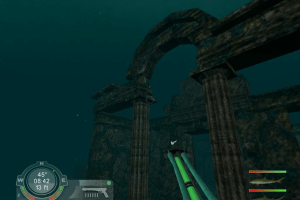 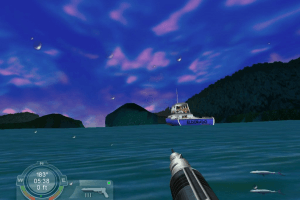 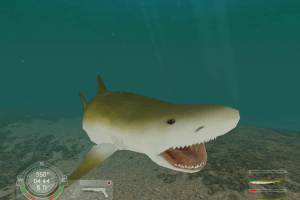 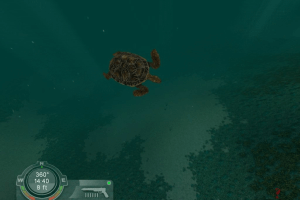 Share your gamer memories, help others to run the game or comment anything you'd like. If you have trouble to run Shark! Hunting the Great White (Windows), read the abandonware guide first!