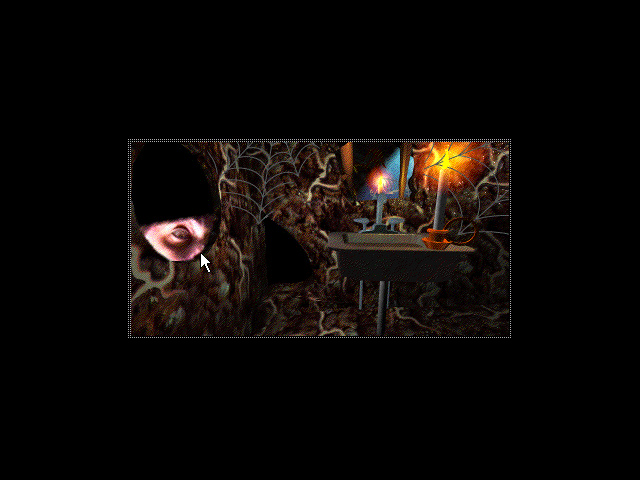 Description of The Residents: Freak Show

The Residents: Freak Show is one of the most unique and compelling CD-ROMs you'll ever come across, no less because it was based on one of the world's most eccentric bands.

Gunther Schmidl says it all in his review for Brass Lantern: "The Residents are a strange band indeed. They have released dozens of albums since 1971, they co-invented the music video, they've not been played on MTV (which shows they must be original), they've done numerous live shows and performances, and still no-one knows who they are. In 1993, The Residents approached Jim Ludtke, an award-winning illustrator and animator who had previously done a video clip for them, with the idea of creating a multimedia CD-ROM experience based on their Freak Show comic book. And thus the first Residents CD-ROM was created. When you first start Freak Show, you are dropped into a freak show tent with a few pitiful, unimpressive attractions. The most interesting part is the last exhibit, a list of 81 real freaks and their stories. The Residents have ensured all these freaks are treated with the proper respect.That sounds like pretty meager content for a whole CD-ROM, and indeed it is -- until you deliberately ignore the pesky owner and go backstage. You can visit the trailers of the freaks that star in the game and learn more about their personal lives -- the humans behind the freaks (this technique is also used in the other Residents CD-ROM, Bad Day on the Midway). This is not a normal adventure game -- you can't die or lose, but you can't win either. You can visit the trailers and explore (and get your fill of The Residents' music, videos, performances and merchandise), learn about the personal tragedies of the stars, then leave. And so, says the closing narration, a freak show is much like life: nobody laughs when they leave."

All in all, Freak Show is more of a showcase of The Residents' works than a real "game." I find it strangely compelling, though. If you like The Residents or weird music/multimedia CD-ROMs in general, Freak Show is definitely worth the download. If you are looking for a game based on their mythos, though, check out Bad Day on The Midway instead.

Note: We have been informed by Hardy Fox of Cryptic Corp. that the copyrights of The Residents CD-ROMs now lie with Cryptic Corp. and Warner Bros, who are under discussions to release updated version of their classics. We have removed download as a result. Contact Mr. Fox at the address below to find out more, if you are interested.

Cool, been wanting to see this for a long time!!

Share your gamer memories, help others to run the game or comment anything you'd like. If you have trouble to run The Residents: Freak Show (Windows 3.x), read the abandonware guide first!