Description of Treasury of Zan

Treasury of Zan is a very obscure shareware graphical text adventure sold via mail order in 1989. The game looks and plays similar to contemporary games from Magnetic Scroll and Level 9: graphics take up the top three quarters of the screen, and the text description and parser occupy the bottom one quarter.

The plot is a cliche variant of The Wizard of Oz, except this time you are carried into another world not by a tornado, but by a suspicious looking wizard who picks you up when your car breaks down in the middle of nowhere. Treasury of Zan places much more emphasis on puzzles than the storyline or characters, judging from minimal room and object descriptions. Unfortunately, the puzzles are a far cry from the caliber of difficult-but-logical puzzles found in Infocom and Magnetic Scroll games.

In Treasury of Zan, the puzzles are either painfully obvious, or needlessly difficult because of insufficient clues, or parser limitations. For example, your task at the beginning of the game is to get your car to run. To do that, you must find a gas can and fill up the tank. To find the tank, you are supposed to know (or look up in some auto encycloedia) that the tank for that car make is under a tail light. "Tail light" is not described anywhere when you examine the car, no matter how hard you try to EXAMINE it.

Forcing the players to interact with objects that are not described is one of the most unfair puzzles in an adventure game, and Treasury of Zan has more than a fair share of these. Worse still, the game is very unforgiving in that you can get irrevocably stuck if you perform actions out of order, and the game often does not give you enough clues as to what the right order is. Turn the key in the ignition too soon, for example, and you will have to restore an earlier save.

The parser is also much more limited than Infocom's or Magnetic Scroll's: many synonyms are not recognized, and you often have to guess the exact verb+noun combination the game is looking for. To be fair, the game gets much better after the initial start-the-car sequence. It is still unforgiving and sparsely described, but at least the puzzles are much more logical, and the game much more open-ended (i.e. many areas you could explore at once).

So once you make it pass the frustrating first section of the game, you will find a competent and semi-interesting text adventure that is not that bad, although it could be much better. 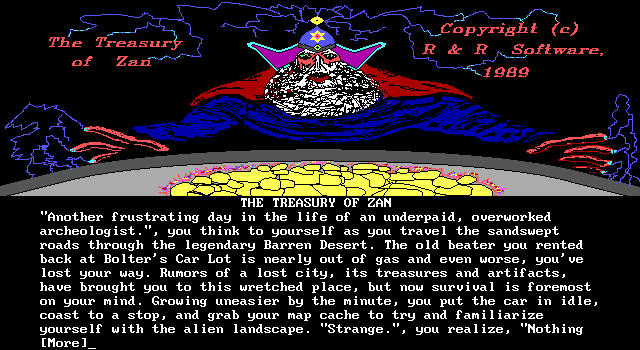 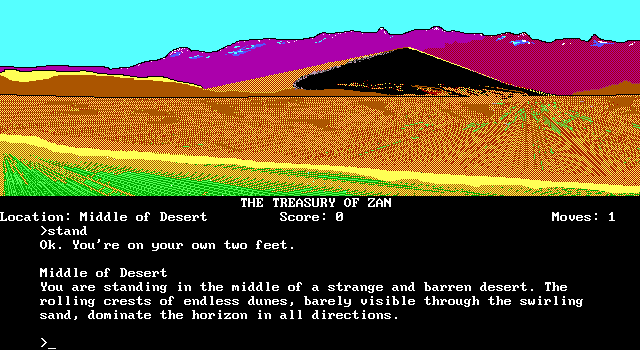 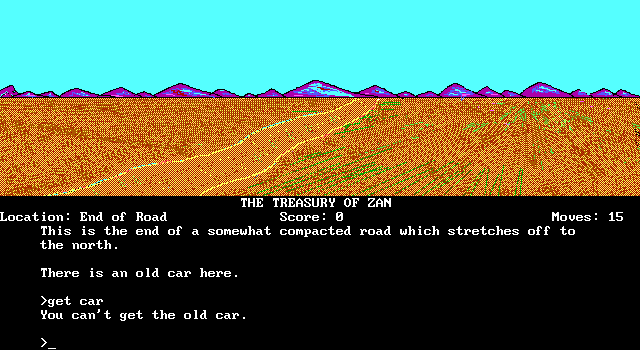 Share your gamer memories, help others to run the game or comment anything you'd like. If you have trouble to run Treasury of Zan, read the abandonware guide first!