If I were to choose two periods of history to nominate as the red-headed stepchildren of wargaming, I'd pick the Korean war and the war of 1812. Both are largely ignored, and I find that surprising given the level of interest that some people express in them. Then again, they don't have the mass-market appeal of World War II - but since they are underdeveloped in the wargaming genre, it's nice to see a game come along that attempts to bestow a proper treatment upon them. Of course, with a name like Age of Sail II, you can pretty much deduce that this title has no relation to Korea. While Empire Interactive gave us a smashingly good game on this topic last year, Akella and Talonsoft have dropped the (cannon) ball in 1812.

The period is generally referred to as "The Age of Fighting Sail," and has been covered by several wargames in the past. Wooden Ships and Iron Menimmediately springs to mind - but that boardgame to PC translation didn't fare so well either. Rather than being a game about the rogues of the high seas, this title is rooted firmly in military history and the fleet actions of the period's super-power nations. Namely, Britain, France, and the emerging naval power of the United States. There's a nice website on the subject of the 1812 conflict here.

Age of Sail II attempts to pick up where its predecessor left off, bringing a fancy new 3D engine and land masses to the flat 2D ocean expanses in which the battles of AOS were fought. The original game had a certain charm about it and was a pretty solid title considering its age. It played, looked, and 'felt' like a Talonsoft wargame -- which, in my opinion, is a good thing. It did seem unfortunate that the ships could only move in 8 facings, there was no land to consider, and the interface consisted of ugly pulldown menus and a top navbar. So, a healthy update into the world of 3D acceleration would be of considerable benefit.

Let us not beat around the bush, though. Age of Sail II is a work unfinished. Some things don't function as advertised, other features are completely absent, and there are a veritable broadside's worth of bugs at work here. The message boards at Talonsoft and Akella are rife with posts from a sizable number of players who are quite disgruntled about issues ranging from runtime errors, absent or mangled graphics on Voodoo3 cards, inability to load a saved game, and crash-to-desktop bugs. The Talonsoft representative on the boards recently formally announced that he has withdrawn his presence from the Akella board due to the hostile attitudes he's been subjected to. Ouch.

Upon opening the box, what I mistook for a quick reference card fell out. In actuality, this pamphlet is the game's manual. This non-effort of documentation pictorially explains the interface, defines a few terms, and then abandons you to discover the actual workings of the game through frustrating trial and error. Twenty-three pages is perhaps adequate for a FPS or platform game, but when applied to a wargame of moderate complexity, it barely provides a foundation for understanding the basics of the interface.

The documentation being as it is, I was left to puzzle out the where and why of the game on my own. This was quite confounding when you take into consideration the various interface items that have no apparent effect, or must be manipulated with other elements to produce any result. The many icons, sliders, and buttons provide weak or nonexistent feedback and audible cues are almost completely absent. Thus, often you are left wondering if something worked at all and what the actual results were. For example, when attempting to order multiple ships into a formation, the buttons don't click or light up; only when a group's assigned to a hotkey do they visibly show as selected. Where's the logic in that?

The first mission of the first campaign requires you to capture five British vessels with your single American ship. After many hours of attempting to capture a single ship by the prescribed method, I gave up, only later to discover that they must simply be forced to surrender to win the mission. However, I didn't know that and the briefing was quite misleading - as many of them turned out to be. Eventually, I was forced to repeatedly abandon the mission in disgust before I adopted a "to hell with it, I'll just kill 'em all!" attitude, whereby I actually won the mission with minimal effort!

Artificial Unintelligence - it's mutiny I say!

Any challenge that the game presents is greatly diminished by feeble AI. The enemy's tendency is to sail straight toward or away from you, and since the ships of the period mounted few, if any, cannons to the fore and aft, this neutralizes their ability to employ weapons against you. So when the enemies approach aggressively, you can simply place them directly off your side and wither them with constant fire as they drive straight towards you, often without firing a shot in return.

One mission began with my ships in a bay, surrounded by multiple enemies on all sides. Three quarters of the enemies turned in various directions and ran aground all around me as the rest sailed past into open waters. On the note of beginning missions surrounded by enemies, I should point out that a good deal of the scenarios begin with your fleet and the enemy well within one another's cannon range. I found this extremely unrealistic and irritating. At the instant the mission commences, both sides dump all their cannons into each other without any opportunity for tactical maneuvering. The stories I've read while researching sail combat certainly don't lend themselves to the feeling of 'instant action'.

Meanwhile, your own ships' crews apparently suffer from over-indulgence in rum. You can essentially tell your ships to get in a line abreast, line astern, general pursuit, custom, or no formation. But this usually results in your fleet clumsily dancing around one another, often while being bombarded by the enemy. Have you ever been to a parade and seen the fez-wearing Shriner guys zipping around in circles in their little go-carts, going nowhere fast? Not dissimilar to watching a full twenty minutes pass in real-time as the sun set and rose again, and my ships stillweren't in any formation. It was mass mutiny, so I had all the virtual captains executed on the fo'castle!

The game also allows for the assignment of waypoints. Unfortunately this met with approximately the same level of success as formations had. In theory, you click a trail of waypoints for your fleet to follow, select the 'hotkeyed' ship group, and finally you are required to click on the tiny flag that serves as a waypoint marker. Even if it actually worked in any capacity, it certainly is unnecessarily difficult to click on one of those miniscule flags without zooming the view extremely close. Again, I attempted to test this in open waters where I had sufficient space to fiddle around without the distraction of enemies about. Two of my ships sailed directly toward the waypoint as requested, while the rest picked a random direction to wander off in. So much for that feature.

The crew management interface allows for assigning your virtual swabbies tasks such as repairing sails, hull, and cannons. Cannon repairs apparently do not function at all. Hull and sail damage can be repaired over time, but once again, this feature has problems. The crew will go about your repair orders for a given period and then mysteriously forget what they were doing and dump themselves back into the available crew pool again without warning or any feedback as to why this occurs. When you have a sizable fleet and many ships need repairs, it is far beyond inconvenience to force the player to constantly re-issue the repair orders.

The enemy ships, however, seem to have an over-active need to repair themselves. They'll stop to repair the damage from just a single cannon volley at times. Of course, since they're now just sitting there, it is quite easy to just pound the snot out of them without fear of retaliation. Not much challenge in that.

Even though the rigging is fouled, there's still some wind in the sails

In the game's favor, it does manage to provide a nice 3D view of the action. The ships themselves are a decent representation, and there is visible battle damage to their sails and planking, although the sail damage doesn't realistically disperse the appearance of rips very evenly. On the whole, the game does present itself attractively. Smoke from cannon barrages drifts in the wind, masts crack and fall into the sea, and the ships blaze nicely.

While there is no editor of any sort (much to the protest of many players) Akella has provided quite a wealth of missions of both a historical and hypothetical nature. There are sufficient stand-alone scenarios of all types to keep you busy for quite a while, and after you've played through a hundred or so missions, there are 6 campaigns to attempt. The campaigns are groups of related, but separate missions, and while they are canned, non-dynamic affairs, you can purchase ships and repair your fleet between missions.

The sense of continuity is occasionally broken by jagged leaps in the campaign structure, however, such as going from command of a larger ship to that of a small schooner. I've also found that the program tends to randomize the stats of my ships when I load a saved campaign game. If they get multiplayer to work reliably (it doesn't now, of course) it might prove quite interesting. TCP/IP multiplay is supposed to support up to twelve players - maybe someday.

It's hard to comment on what type of game Age of Sails 2 is, simply because most of it doesn't appear to function. A messianic patch has been promised, but it's encountered the inevitable delays, of course. If it does arrive and succeeds in its claims to perform an 'uber-fix' on the game, expect an update on this review. Until then, save yourself the aggravation and steer clear. 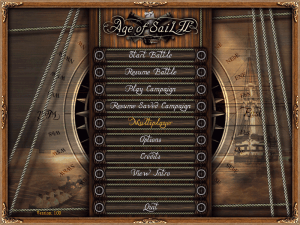 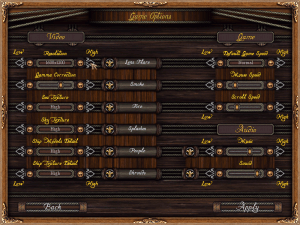 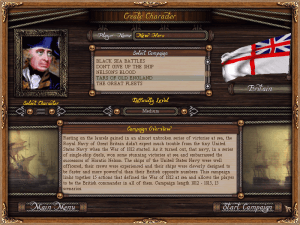 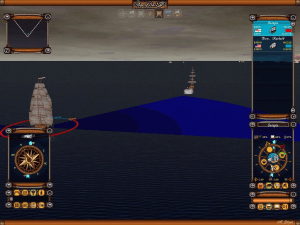 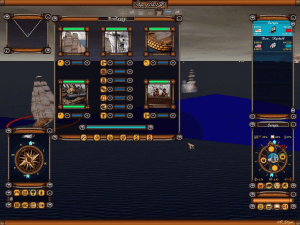 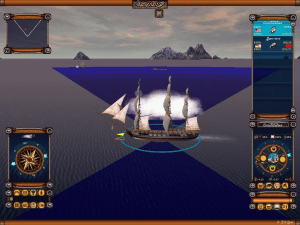 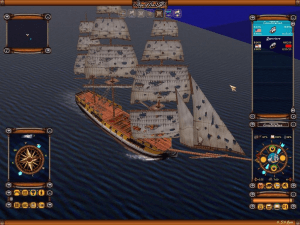 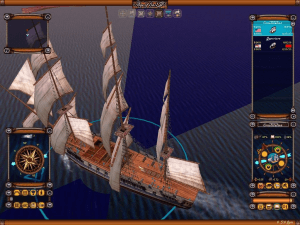 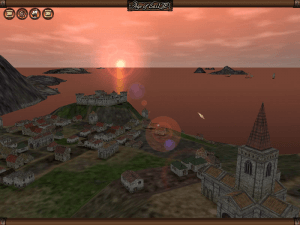 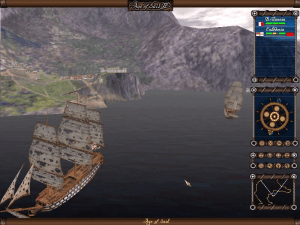 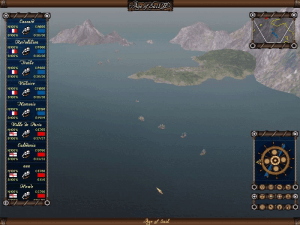 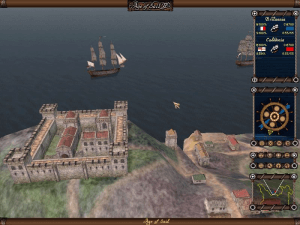 Was able to get it working on a brand new Win10 machine.

Launch game, go to settings, do NOT run in 1600 resolution, crashed on me.

Play game. (fingers crossed for you)

Can run the game but the language is stuck as Polish. Does anyone know a solution for this?

It installs properly, but when I try to open it, it asks me to enter the CD, so I used the crack. There are two cracks - one in the game and another on this website.

When I use the crack given in the game, I get a message "dxinit: the operation is not supported" and the game doesn't open.

When I use the crack given on this website, the game doesn't run and I get no error message.
How can I run this game ?

Would like to run Age of sail 2 on Win 10 - I cannot install - do you have any guides on how to install from your downloads?

Abandonware be blessed! bring legends back to life -respect

Anybody who needs to open a .mdf file use PowerISO @ http://www.poweriso.com/download.php

how do i run mdf file

Share your gamer memories, help others to run the game or comment anything you'd like. If you have trouble to run Age of Sail II (Windows), read the abandonware guide first! 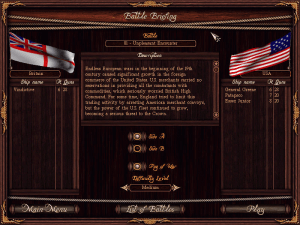 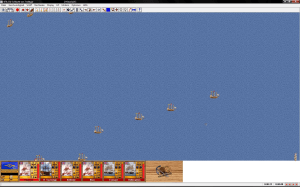