A potentially great game that is unfortunatelly bogged down by weak puzzles that don't fit well with the story. Like all other Synapse games, the high point of Brimstone is definite the story, which is very creative, original, and well-written. Set firmly in the King Arthur mythos, you are Sir Gawain, famed Knight of Round Table. The plot is a patchwork of bits and pieces from the Arthurian legend, although no one event in particular.

Finding yourself in a dreamy state, your nobility and loyalty to King Arthur will be sorely tested as you face Under-demon Fum and denizens of the Ulro underworld (the Arthurian version of hell). Many familiar characters, such as the Green Knight and Morgan Le Fay, appear in the game and are described in great detail.

Brimstone is divided into five chapters which must be played in order, all of which take place in different locations. Designer James Paul did an admirable job of creating a very atmospheric Arthurian hell that feels very authentic. Unfortunately, the game isn't as coherent as, say, Breakers, and it is not clear how each chapter fits into the overall story until the very end (and even then, there are still loose ends that will leave nagging doubts in your mind). The parser is adequate in a sense that it understands common commands such as AGAIN and WAIT, although it is still not very flexible (typing "LOOK AT MAN" anywhere, for example, will yield the answer "Gawain, you knave, you are nowhere near Master Adam," although you may have never met Adam before).

Although most puzzles don't fit well with the story, they are nonetheless quite clever (but not always logical). In mid-game, for example, you will need to THINK OF objects to pass, similar to Interplay's Mindshadow.

Overall, Brimstone is best described as "close, but not quite" a classic. Despite an interesting plot, the pace is too fast for most people to take in everything that's happening, and the significance of each event in Gawain's life. Infocom's Arthur has much better integrated puzzles and a more coherent plot, although it is not as imaginative as Brimstone. An underdog, yes, but not a true classic. 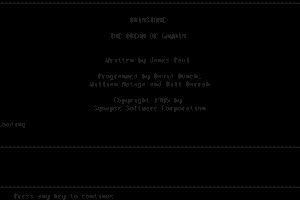 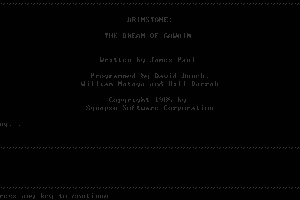 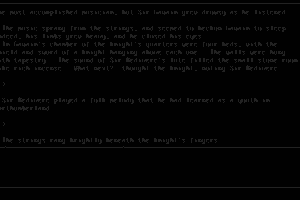 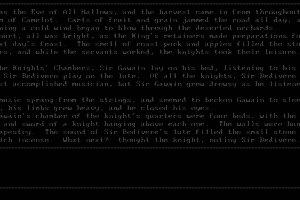 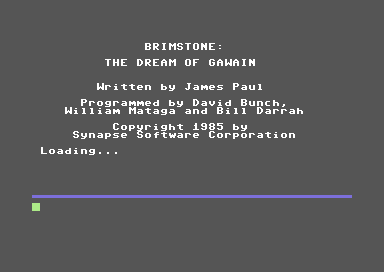 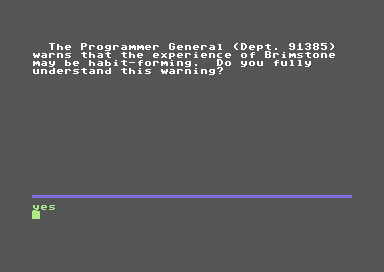 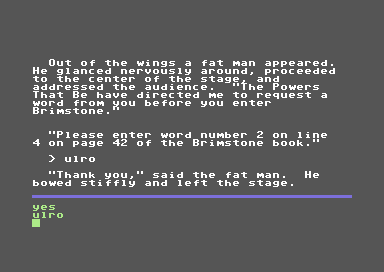 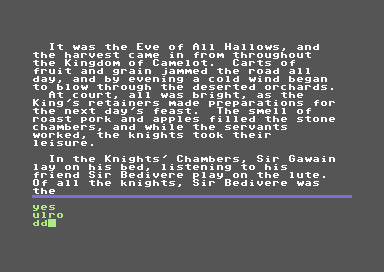 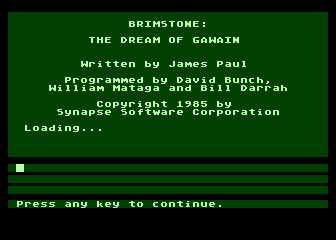 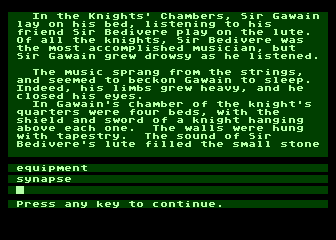 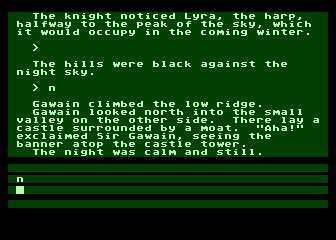 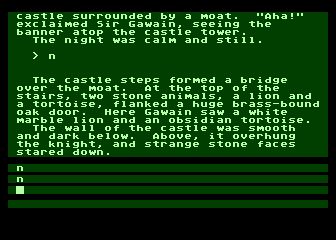 Share your gamer memories, help others to run the game or comment anything you'd like. If you have trouble to run Brimstone, read the abandonware guide first!