Empire of the Over-Mind

Description of Empire of the Over-Mind Atari 8-bit

1981, the year Empire of the Over-Mind was released on Atari 8-bit, as well as Apple II. Made by Microcomputer Games, Inc. and published by The Avalon Hill Game Company, this adventure game is available for free on this page. 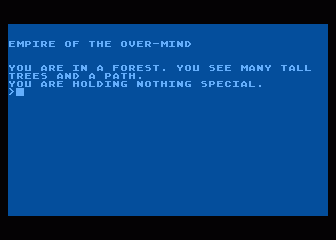 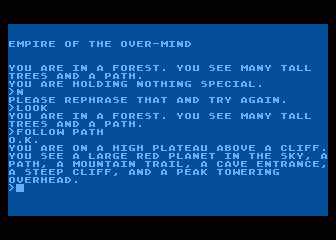 Share your gamer memories, help others to run the game or comment anything you'd like. If you have trouble to run Empire of the Over-Mind (Atari 8-bit), read the abandonware guide first!

Empire of the Over-Mind is an excellent text adventure written by Gary Bedrosian way back in 1979 for the Apple II and Tandy's TRS-80 computer and published by Avalon Hill.

The game was never ported to the PC, but the author has ported it himself in 1986 and has kindly put it up on his website for free download (thanks, Mr. Bedrosian!). The Over-Mind in the game's title is a powerful golden sphere that has taken over the Kingdom of Alcazar by deceit and corruption. Your task, as a (always weary) traveler-cum-hero, is to locate and destroy the Over-Mind. Supplied with the game is a well-written 21-verse poem called 'The Rhyme of the Over-Mind' which is written in an Olde Worlde style. It takes a while to understand what is going on, but reading this Rhyme is required, because it contains subtle clues you will need (the rhyme is included in the download). The game uses the standard and quite primitive VERB-NOUN parser, but it is more robust than many other games of the same period (Scott Adam's titles come to mind) even though it is no match for the superior parser of Infocom or Level 9. What the game lacks in technical aspects, it more than makes up for in imaginative gameworld, captivating prose, and fun puzzles. You will encounter many fascinating fantasy creatures and obstacles, including Griffin the Gold, a menacing skeleton, the insidious mind-whip, and other ingenious traps. The original Apple II game was memorable not only for a fun game, but also for the excruciatingly slow loading time (I remember waiting 15-20 minutes for the game to print a response to my input). This is no longer the problem in this MS-DOS version, so there is no reason for any IF fan to overlook one of the most underrated classics of all time. Two thumbs up!