There's not much room for innovation in a racing game. Probably the last properly original drive 'em up was Gran Turismo, a PlayStation classic, and despite spawning a host of imitators on various consoles, no one has tried it properly on PC yet. EA's Motor City Online looks like it might fill the role nicely, but that's not due for quite some time yet.

Whereas most recent racers have focused on producing an accurate representation of one real-life series, Rage's eRacer concentrates on online play, and sets it in a modern-day but imaginary competition. The courses are set in such diverse locations as a chemical plant, an aircraft carrier and an English stately home. Most are locked at first, and can be opened by winning races.

The single-player league mode pits you against computer-controlled cars in a series of races. Your budget must be managed carefully, as races cost money to enter. Prize money for doing well tops up your funds. You'll find the AI cars quite a challenge - they are quick and unforgiving, meaning that if you're not a racing game aficionado, you'll probably find even the first race too much.

It doesn't have licensed cars, but some of the models are recognisable imitations of modern vehicles. More powerful cars, again locked at first, resemble GT cars. So without the car manufacturers' feelings to offend, Rage has been free to implement a car damage model, with collisions producing a toned-down effect on the bodywork. A percentage on the left side of the screen gives your current damage level, which must be repaired between races in the single-player game, costing money. So too much careless crashing into stuff, and it's curtains for you, racer boy.

Rage has a reputation for producing graphically excellent games. Though eRacer has some rich and appealing texture work, the scenery has very low polygon counts, often just being flat walls with pictures of shops superimposed on them. There's no wildlife or spectators around either. This gives the races a strange, isolated and lonely feel - the tracks often come across as being lifeless. For those moments when you're either leading the pack or left behind, this makes for dull driving.

This feeling is highlighted by the uninspired track design. Most of the courses are a series of short to medium straight sections linked by simple right-angled or hairpin bends. The odd crossroads or jump appears, but these generally serve more to irritate than provide interest. Occasionally there's a choice of route, but these are generally badly signposted and confusing, leading to many wrong turns. Though the settings for the many tracks are diverse, the circuits themselves don't make for good racing.

The graphical engine also shows some technical shortcomings, as although it generally maintains a decent framerate, it will occasionally judder to a near-halt. Racing games being what they are, this tends to happen at crucially inconvenient moments. The ludicrous sun-glare effect should be turned off at the earliest possible opportunity.

The driving model doesn't seem to be able to decide whether it wants to be an arcadey, fun, powerslide-and-handbrake job or a realistic, physics-heavy simulation. It's oddly isolating, and there's none of the subtle feedback that games like Colin McRae give the player. At no point does it achieve a sense of controlling a real car, nor does it ever get sufficiently fun to qualify as an arcade game.

Peripheral support is also woefully lacking. There's no force feedback, or dual-axis throttle control, so owners of expensive wheels will be disappointed. It's hard to understand the reasons for their omission, as these features have been fairly standard in racing games for a while now.

eRacer's online facilities have a number of interesting features, like the league and best-laps facilities, and if you have one of these new-fangled WAP phones you'll be able to bore your friends in the pub by showing them your latest victory details. But online racing games have always been dogged by lag, and though it's early days for eRacer in this department, we did experience some problems. Cars would frequently warp about the track, leapfrogging other competitors seemingly at random. This makes for a frustrating experience - who wants to be overtaken by a car in such an arbitrary way?

On the positive side, the online server browser is OK, and the range of notification facilities is excellent. It also looks as though there will be plenty of new tracks available for download after the game is released.

Perhaps we've all been spoiled by the collection of top racing games that have been appearing over the last few months? Grand Prix 3, Colin McRae 2, NASCAR 4 - each far surpasses eRacer in many ways, especially considering NASCAR 4's thriving online community. It's hard to find anything to recommend this cold, uninspiring racer. 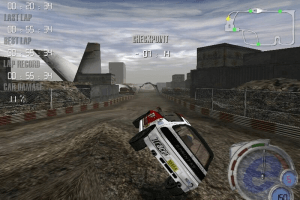 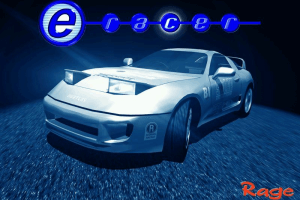 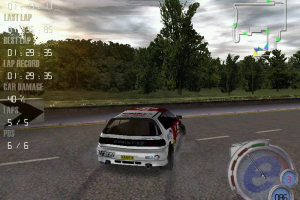 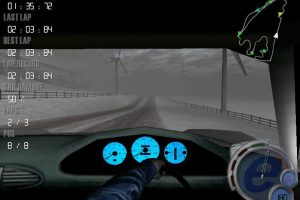 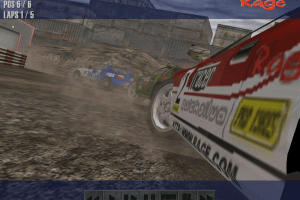 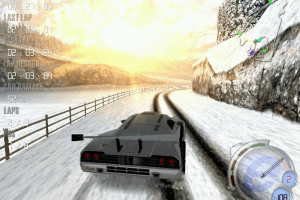 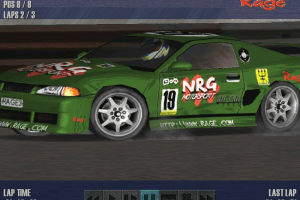 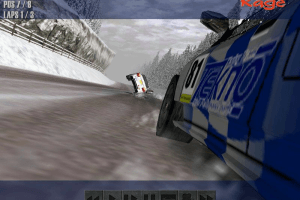 I only make Games, with have no Modding Support.

Share your gamer memories, help others to run the game or comment anything you'd like. If you have trouble to run eRacer (Windows), read the abandonware guide first!