I, Damiano: The Wizard of Partestrada

Description of I, Damiano: The Wizard of Partestrada

Despite the unique setting and some novel ideas, the game unfortunately falls flat from poor parser, average writing, and almost nonexistent puzzles that will disappoint IF fans. The game starts out promisingly enough. You are Damiano Delstrego, a young witch who lives in a different but very evocative Renaissance Italy (fans of Umberto Eco's novels will have much to like here). Your life is soaked in magic: the angel Raphael drops by from time to time to give you lute lessons, while his evil brother Lucifer scheme with his cohorts to subvert the city of Partestrada. As in the novels, you must find a way to save your beloved city from Lucifer, as well as from evil General Pardo who is about to start a bloody war. Bantam took a bit of liberty, though, no doubt to make the game more puzzle-oriented: your specific goal is to find the sacred stone, which contains the secret of life (uh-huh), that has the powers to save the city.

Gameplay is standard, with a limited parser that can't understand complex sentences. The game's response to your input is presented as thoughts from Macchiata, a talking dog sidekick from the books who calls you "Master" and offers advice in sticky situations. There is a good-evil meter at the top of the screen that keeps track of how "pure" you remain throughout the game (i.e. whether you refuse or accept Lucifer's aid). Puzzles, however, are disappointingly sparse: even more so than Bantam's earlier Sherlock: Another Bow, you can solve most "puzzles" in the game by simply answering "no" to Lucifer's questions (since answering "yes" usually lead to an untimely death. For example, as the game begins, you are bargaining with Lucifer himself (standing on his palm, no less), who is offering you aid in vanquishing Pardo. If you accept, you immediately die, and it's game over. This false sense of freedom of choice is shattered very quickly, and this makes the game very linear and limiting.

Overall, I, Damiano is a below-average IF title that is worth a look on the merits of its original premise alone, and really nothing else. The good news is that the game's lack of challenging puzzles makes it a good choice for IF beginners. But then again, you could instead play Brian Moriarty's clever Wishbringer if you want a good beginner's game. 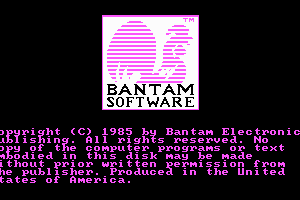 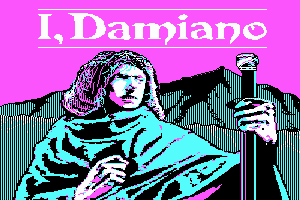 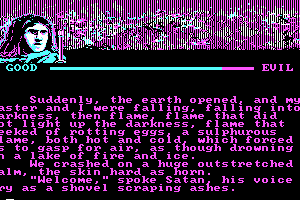 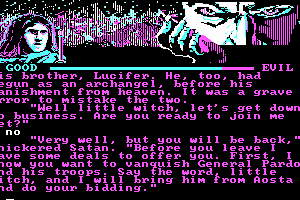 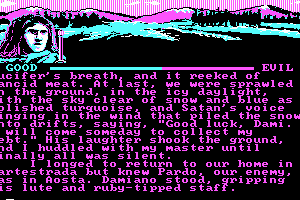 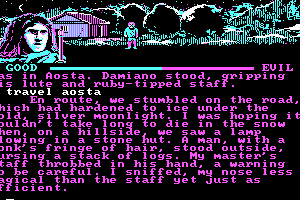 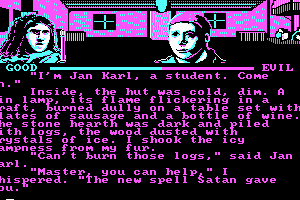 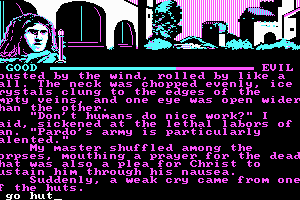 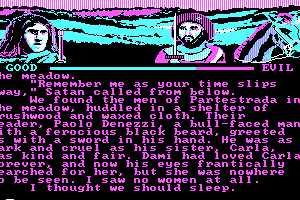 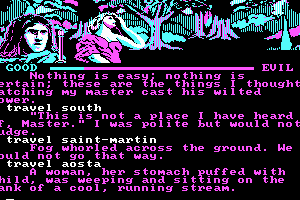 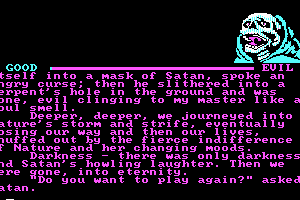 This game is VERY TOUGH but absolute fun. You're brought back to life by Satan and must kill your enemy. It's a very strange game but quite fun if you like to read and pay VERY close attention.

Share your gamer memories, help others to run the game or comment anything you'd like. If you have trouble to run I, Damiano: The Wizard of Partestrada, read the abandonware guide first!