Moraff's Revenge is one of those really old games, made back in the days when no one had heard of CGI and Sega Master System was hot stuff, that you now download to kill time, boot up, and go 'What the HELL?'

The game is yet another RPG-style D&D rip-off, with your principle objective being to go down into dungeon, kill things, get treasure, go up to village and buy stuff that help you kill bigger things, heal for exorbitant prices, go back down to dungeon. I have vague memories of being told of a Fountain Of Youth attainable on Level Six Billion and Three (well actually level 70, although in the time you take to reach it you may as well have not bothered, since you started searching at age fifteen and gain it at age ninety-seven).

You can even play elves and hobbits if you want to, although this doesn't seem to have any noticeable effect on gameplay (since you can change your randomly-generated stats and there is no player-character graphic). The only choice you make that WILL effect your gameplay is whether you choose to become a fighter or a wizard, the difference being of course that wizards can cast spells and fighters can use weapons higher than a knife.

At the time it came out it boasted, if I remember the box correctly, of '3D environments', which in those days meant that you could move in four directions. It's true that there is a section down in your screen in which you can see, in first person, to your left, right, back, and front, but the views look all identical anyway, even regardless of whether you are down in the dungeons or up in the village.

The passages of the dungeons/village you explore are a maze of outlined passages with the occasional garish red door, giving the impression of the Office Complex from Hell. Occasionally a monster will appear in one of them. The monsters are just as cute as the environments, with five or so templates for about fifteen different creatures, which means you get Mr 2D Happy Frog playing the role of things like Giant Killer Toad, Venomous Salamander, and the Long-Legged Scissor Man.

Personally my favorite part of the game is the encouraging and mature little message you get when your non-specific little character meets their unfortunate demise (YOU ARE DEAD HA HA HA). It's not what you'd call memorable, but gameplay is somewhat enjoyable, so long as you're in the mood for a wander-about-aimlessly-in-samey-looking-dungeon-levels-and-pound-wildly-at-the-weapon-key-when-something-moves sort of game.

It's very silly and pointless but its creator Steve Moraff obviously had fun making it and that's the important thing. 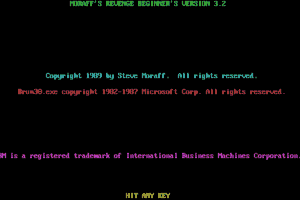 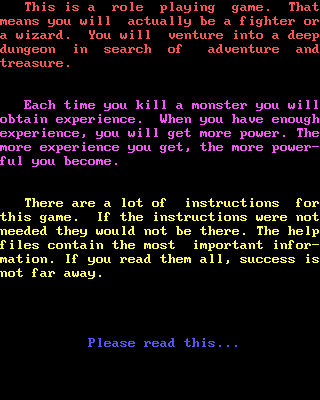 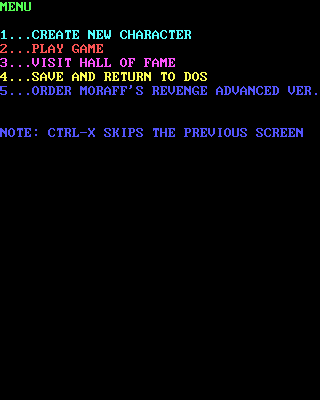 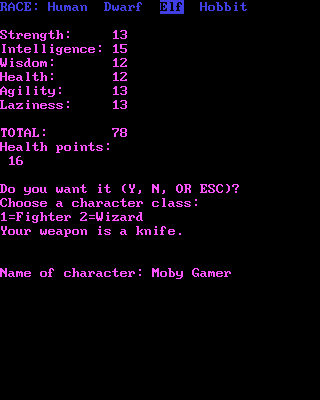 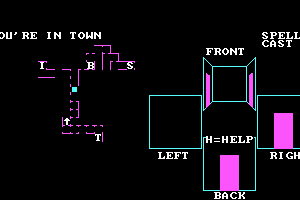 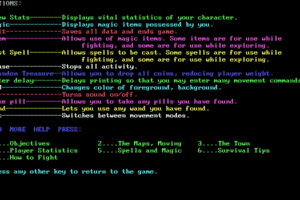 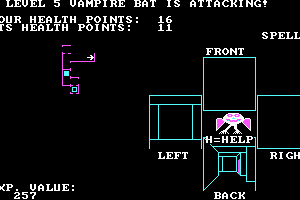 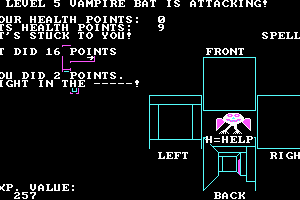 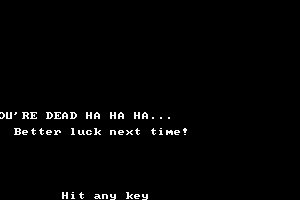 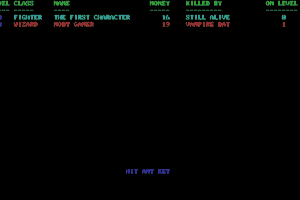 Oh man this was one of the first games I ever played! Loved it so much. I never beat it but my dad did. All the way to level 70 and found the Fountain of Youth. What a game!

Typo on the "God?" spell: It can either nuke the enemy for over 1000dmg, hurt you for less than 100dmg, or one of the other four possibilities. (In a game with permadeath where you will have many many difficult encounters, why would they give you a random spell like this?)

You can find the full version (Advanced version 3.3) on archive dot org--though I actually bought this one. Just wanted to post a guide for others on playing this game since I just got around to beating it.

Fighters are actually better than wizards since they can get all the equipment in the game and still cast all spells. Once they get a high enough intelligence and wisdom, they will get a non-trivial amount of spell points on level-up, and they will eventually be able to behave just like a wizard at the dungeon levels when spells matter most--but will do much more damage in melee and avoid attacks better. If you can afford to go to the Kings Inn, do so; it won't be until very late in the game when saving up for temple level-ups becomes practical.

I recommend grinding magic items in levels 4-6 (especially a regen ring) and getting up to being able to do reliable 70 damage before going to level 7 and confronting the level-draining wraiths and wights (they look like zombies). Vampires on level 15 onward always chase you and spawn with high health (Spectors are like wights/wraiths). Be wary of any potential level-drainers when you cannot reliably do more damage than ten times the dungeon level. Rise is the only combat spell that is guaranteed to resolve a bad level-drainer confrontation. At level 35, all the monsters change and all of the non-human-looking ones can drain stats (except the ghost which is another level drainer, and the giant fist and stomper which do 25% of your max HP in damage per attack instead).

You can save-scum to get the stat-ups from the Mocciolo spell if you want to skip the biggest part of game progression--the invaluable stat-ups from books and pills. Also, if you move north one space from the (10,10,0) location that spell sometimes warps you to, then if you get warped to level 50 you will be in a tiny room where you won't have to worry about monsters. The fountain of youth could be anywhere in Level 70--better hope it's not in a 1x1 room!

Combat:
1. Potion of Speed (short-term agility boost)
2. Potion of Fire (for ~2min you can press "B" to breathe fire instead of other attacks, does around 20-50dmg)
3. Potion of Shielding (short-term big armor boost)
4. Potion of Health Points (duh)
5. Potion of Relocation (same-level random teleport)
6. Holy Hand Grenade (monster = ded, works on everything)

To keep from having your levels drained, exit the game as soon as you encounter (before fighting) a level-draining monster, unless you have a grenade or other instant kill weapon. There's a special fountain on the (bottom) last level. Enjoy!

Can't make any real progress due to level drains, at level 12-13 I get drained back to 8-9 and have to climb again. I can't seem to find any real counter to this.

I found that the game will generate all kinds of errors unless you take off the read only characteristic on the files. Seems the game needs the ability to update some of the files during game play. All files come read only when extracted.

This is the freeware version that ends at level 17.

Try running it on Dosbox. Works fine on 8.1 for me.

This game was fun and addictive. I played it as far as the freeware version would let me when it first was released, but at the time I was young and making minimum wage that I was supporting my family on. Now that I can afford to buy it, I wish I could find it again in an updated version that would work on windows 8.1. By updated, I just mean that it would work on my laptop.

Once I get to a certain point in the play back, the game asks me for a certain number from some codebook. Is there somewhere to find this information, or some other work around I should know about?

Does anyone know if this is the full version or the freeware version?

Don't know, it works fine on Mac. Try to launch install.bat first and see how it goes.

It will kick in but it just wont let actually play it... It says theres a problem with the BEGIN file.

I launched BEGIN.EXE and it worked fine

Imhaving some trouble with this game and my D-Fend Reloaded for some reason i cant find the EXE file and it wont let me play. :( I have played alot of games through the D-Fend but this is the only one thats giving me hell....anyone have any pointers?

Share your gamer memories, help others to run the game or comment anything you'd like. If you have trouble to run Moraff's Revenge, read the abandonware guide first! 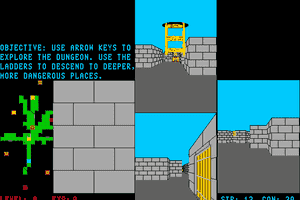 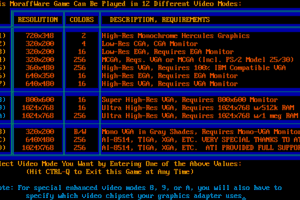 Moraff's Dungeons of the Unforgiven
DOS1993 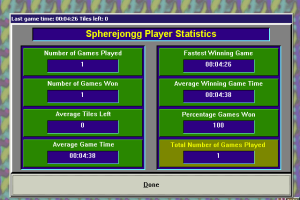 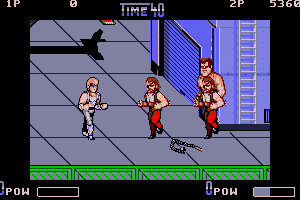