One of the better games in the niche sub-genre of tongue-in-cheek strategy, Nuclear Warlets you unleash a nation's nuclear might at other nations headed by equally sadistic leaders, all witty caricatures of real-life world leaders.

The big stars in this game are Infidel Castro, Jimi Farmer, Tricky Dick, Mao the Pun, P. M. Satcher, Ronnie Raygun, Ghanji, Gorbatchef, Col. Khadaffy, Kookamamie and you, Hans Meier. You compete against 4 opponents, any of which can be computer- or human-controlled.

Play options in each turn is mostly limited to three choices: using "propaganda" on an opponent to try to get his or her opponent to defect into your own country, nuking someone, or setting up some nuke-protection facilities if you fear you are the next target. Since you can only do one action per round, you must choose carefully. From time to time you will be given the option to produce some weapons, but what your people produce is more or less random.

The limited gameplay options in Nuclear War reduce the game to a boring guessing game, especially after you notice that each enemy has a favorite strategy he or she always uses. For instance, Ghanji and Farmer always use Propaganda, while Ronnie, Kookamamie and Khadaffy love nuking. If you are very unlucky, all four enemies can choose to attack you first, thereby ending the game right after the first turn. Definitely not a good game design.

What saves the game, to some, are the jokes that your enemies crack during the game, and various random events that look like cheap gags but are fun to watch nonetheless. You might see a town suddenly lift off into space, or UFOs land on your territory. If you don't appreciate this kind of dead-pan or political humor, however, you will find Nuclear War just another badly executed "light" game that is full of good ideas, but lacking in gameplay. 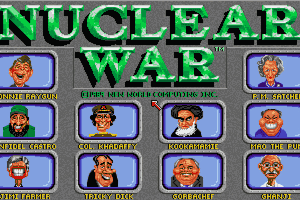 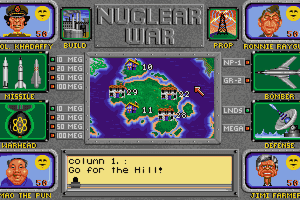 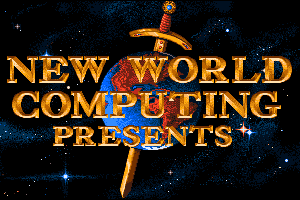 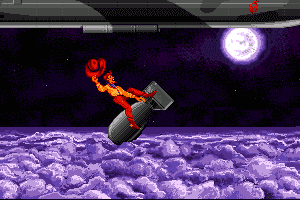 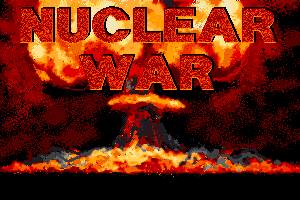 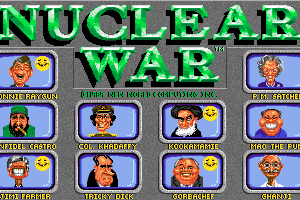 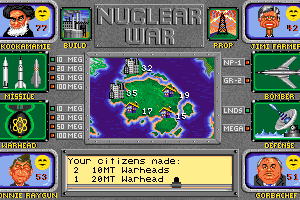 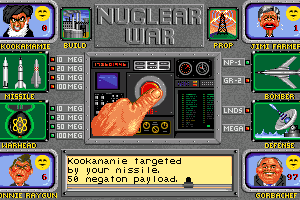 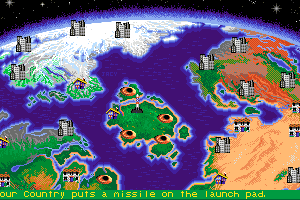 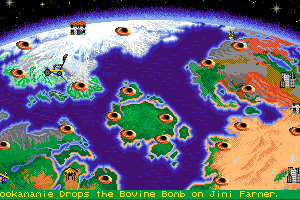 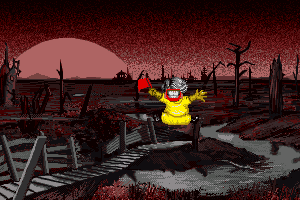 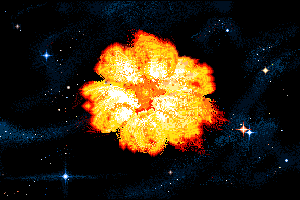 Wait how do you get roland sound? I have mt-32, but don't see a version that supports it to set up, just pc speaker.

The updates DOS version is great with Roland sound.
The original was a very poor port of the Amiga version that didn't use 10% of a 286's machines capabilities. Otherwise it would have been vastly better.

Please find someone to create an app of this!

The review on here is horrible, considering that this is one of the most additive games I've played since it's creation. To this day I still play this a ton on my Emulator. If only I could find a modern day port, or especially a phone-App version. That would be AWESOME.

As usual, the Amiga version is way better than the PC version.

Thanks! This brings back so many memories. Loved the Amiga version where when a 100 megaton warhead was produced everyone went; "Ooooooooooooh!"

Finding this game online completes a missing piece of me.

It's a DOS game. Open it with DOSBox.

I cant seem to open up the game. I'm on a new laptop running windows, whenever I try to open up what appears to be the game it just says "Cant run with your PC, To find a version that runs with your PC check with the software publisher." If I try to open up any of the other files it says my computer cant open up a .app file type or its a software file for the game with images and sounds and such. Looks like a cool game but unfortunately it seems like my computer is just looking at it and trying to figure out what to do, but then gives up instantly.

One of the most addictive games I've ever played. Simple to learn, hard to master. I actually found the manual for this game the other day in a box of junk in my attic.

I play this game in my commodore amiga , and the intro game so fun , very fun
the man in down to plaine .

Is it possible to download this game as an App to your IPhone?
If so what is It called.

Can I play this game in a window instead of fullscreen? I want to play it while browsing.

This game was Sooo Much Fun! I want to introduce it to my kids.

There were a couple of editors out there at one time. One would allow you to change the character names, another would allow you to import 16-bit small images to replace the faces that you created using MS Paint and saved to either a BMP or a TIF. One pirated version released had Steve Jobs, Steve Woz, Bill Gates, Steve Ballimer, Larry Ellison, and even the late Phil Katz replacing several of the leaders. Wish I still had copies of these, but I tossed all my floppies when Vista came out and none of my ancient pirated games would work anymore. Wish I'd known about DOSBox beforehand!

Share your gamer memories, help others to run the game or comment anything you'd like. If you have trouble to run Nuclear War, read the abandonware guide first! 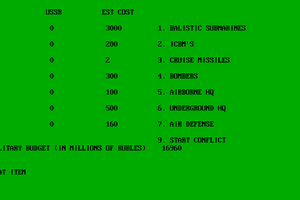