Whereas most people have their childish enthusiasm and energy slowly eroded by the demands and pressures of adult life, I was actually born a sad, miserable old git with all the passion and joy of a bag of gravel. While this has left me a bitter and twisted wreck unable to partake in even the most ordinary kind of pleasures, it also means I have a nose that can sniff out crap before I so much as step inside my local game store.

With Real War, my deductive nasal senses went on full alert. It might be sold as a realistic, modern-day strategy game, but the truth of the matter is somewhat different. There's a huge stamp on the box that claims it's, "Based on the official JOINT CHIEFS OF STAFF training game developed for the U.S. military" and given the utter lack of realism in Real War, that's really rather worrying.

What is real, however, is the background story, but given the current events in Afghanistan, it's ironically just about the only element that probably shouldn't be realistic. The storyline goes that a generic terrorist organisation, the ILA, has gained backing from an unknown major power and is posing a threat to world stability. Naturally, the U.S. cannot allow this and it's up to you to stop them and bring order to their chaos. You can play as the U.S. or the ILA in 2 separate campaigns, each with 12 missions. The U.S. campaign seems to mirror the current situation in Afghanistan, and the ILA campaign involves targeting civilians and causing deliberate loss of life. A bit distasteful, to say the least.

As far as the actual gameplay goes, Real War is pure, unadulterated old-school RTS. And I do mean old. The graphics look like they've been plucked from the days when Red Alert was a hip and trendy young funkster (that's five years ago, now) except they're even less practical. Your infantry units look like tiny little stick men that are almost impossible to make out even if you zoom right in; it's possible that their dot on the mini-map is bigger than they are, because it's certainly more distinctive.

The buildings not only look dull but it's also hard to differentiate between some of them, which can make selection a little annoying as you randomly flick between them trying to get hold of the right one. But that's not half the story. American units are painted a bright and colourful grey/green, whereas ILA units are a green/grey. You see the difference there? Well you won't in the game because if you don't make sure every single one of your units is in an easily selectable group you'll be struggling to pick out your guys from the bad guys.

What compounds this problem is the fact that the units move so damn fast, it's almost impossible to click on the blasted things. Units fly across the screen to such an extent that you actually have to lead your target and wait for it to pass under the cursor. The speed of the units relative to each other is also wrong. Tanks and trucks travel at the same speed as helicopters and artillery guns. Fighters move a little faster and troops move so slowly they're virtually useless without a transport of some kind.

Developer Semi Logic has tried to get around this by introducing an interface whereby you can pick your troops from a selection screen near the bottom. Just click on the appropriate land, sea or air menu and a thumbnail of all the appropriate units will appear. It's a neat idea, but the problem is that the thumbnails are so damn small and indistinguishable, it's almost impossible to tell what they actually are. It also takes up a lot of screen real estate and it restricts what you can see at any one time.

There are also some inexplicable restrictions to the number of buildings and units you can create; for example, on most missions you're restricted to around seven artillery units. Now, the thinking behind this is obvious: it's there to avoid the traditional RTS tank rush, prevent the player from finding an uber-unit and using that to dominate the enemy. The problem is, it's somewhat inelegant to impose an arbitrary limit in this manner.

Resource gathering is also quite strange. Instead of harvesting, supply depots act as the refineries found in every good (or bad) Command & Conquer clone. Goods are flown in automatically and at regular intervals by helicopters, which you need to protect from enemy fire. The only effective difference is that apart from the very occasional independent supply station, there are no resources to fight over, which is actually a bad thing because it's usually a major strategic issue in any good RTS.

Another criticism concerns the pathfinding. While it was competent in most situations, there were times when unit needed nudging after getting stuck behind a tree or something. Unit AI is much worse, however. More often than not you're lucky if they ever actually fire on an enemy unit without you telling them to. Your base can be under attack by 17 gazillion enemy units and your guys won't budge an inch. They don't seem to use tactics of any sort, they don't choose the correct unit to attack (your troops seem to love attacking enemy tanks but only for the short time before they get squashed) and artillery will take out half your base if you're not micromanaging the task of keeping them away.

To make things seem difficult, on just about every mission you'll be rushed by the enemy fairly early on. This has its good points in that it keeps you on your toes and means you can't just dawdle around. Its bad points are that once you've got through the first two attack waves, you'll only face the odd troop or two thrown your way when the bad guys can be bothered.

It's a rare occasion, but I honestly can't recommend Real War to anyone. It's a distasteful, ugly, boring and vastly unoriginal RTS. If you want something realistic and modern, WW3: Black Gold presents a much better option. Or try Operation Flashpoint or Ghost Recon - they might not be RTS games, but they involve a lot more strategy than Real War. 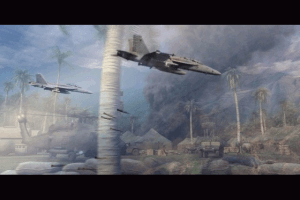 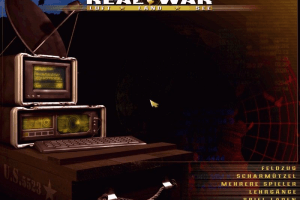 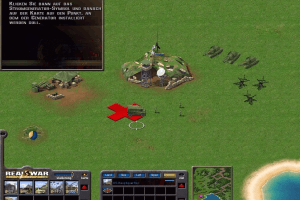 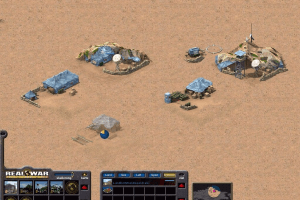 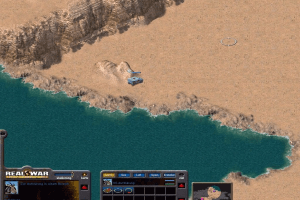 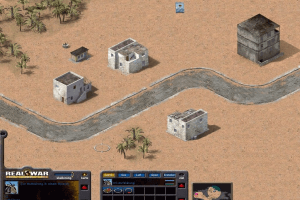 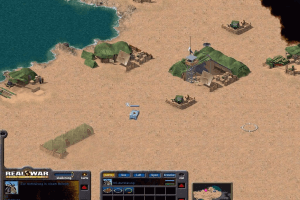 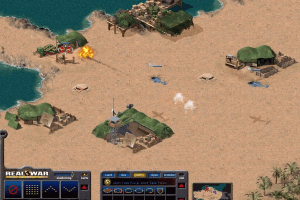 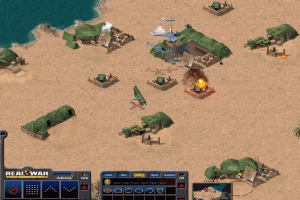 Share your gamer memories, help others to run the game or comment anything you'd like. If you have trouble to run Real War (Windows), read the abandonware guide first! 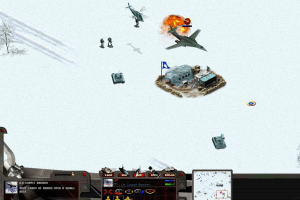 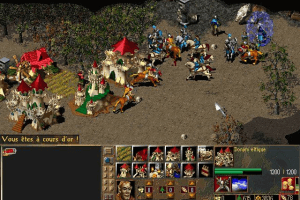