The Taking of Beverly Hills

Description of The Taking of Beverly Hills

An utterly pointless formula action-adventure movie. The Capstone name (in case you didn't know, this is the company that is unmatched in its ability to ruin any popular license). Sounds like a recipe for disaster? Sure enough, a disaster it is. But if you are REALLY desparate to know what this game is about or why it is so horrible, well then-- read on...

If you've never seen the film (and if that's the case, count yourself among the fortunate ones), The Taking of Beverly Hills is an offbeat, thoroughly predictable action flick that puts TV heartthrob Ken Wahl in the role of Boomer Hayes, (American) football star who must defend Los Angeles against terrorists who have kidnapped the city's richest, most influential citizens. Along the way, he will stop the thief of a priceless Botticelli Fresco; free obvious love interest Laura from the ruthless billionaire, Robert Masterson; and of course, stay alive amidst the mayhem in Rodeo Drive.

While Wahl obviously tries his best, the plot is so overdone and everyone else overacted so badly that the movie is sure to grate on most people's nerves before long. And yet its wacky plot could make a great game.... if....... unless it's licensed to Capstone, that is. Long a company infamous for terrible PC game conversions of blockbluster licenses, The Taking of Beverly Hills is no exception to Capstone's norm. Although it purports to be an action adventure, neither element will hold anyone's interest for long: the action sequences are limited to you equipping the right gun at the right time, while the adventure portion involves picking up anything that isn't nailed down while avoiding the terrorists in police uniforms. The existence of inventory is somewhat moot, since you don't have much control over how the items are used: some will mysteriously work when you acquire a second item, and in certain locations automatically. This means that you can easily (although tediously) finish the game by just clicking on every item in every scene without using any thought.

The bottom line (if I didn't say it clearly enough): avoid this game at all costs. I wouldn't even see the movie, and this Real Dog isn't going to change anyone's mind, either. 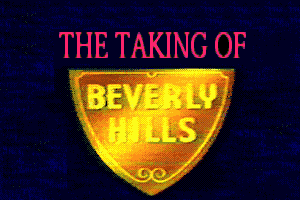 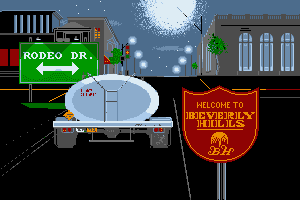 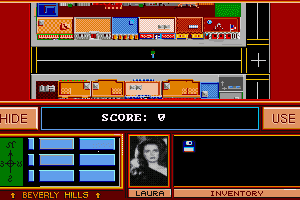 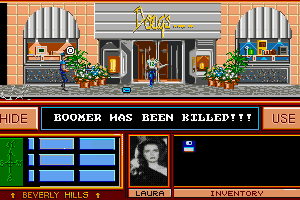 This is a phenomenal review. The hatred is palpable. Thank you.

Share your gamer memories, help others to run the game or comment anything you'd like. If you have trouble to run The Taking of Beverly Hills, read the abandonware guide first!