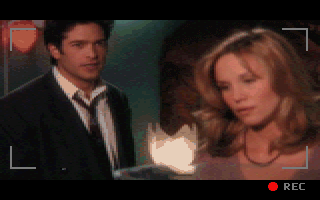 Voyeur II is a difficult game to categorise. It seems to take it's cues from 'Rear Window'. The player takes the role of a person who lives in a cabin in the woods, and spends all his time watching birds, and animals. However, your peace is disturbed when a huge great forest villa is built just a short distance away from his cabin.

After the death of the owner, also the head of a big scientific research company, you decide that something dodgy is definitely going on, and you set up your video camera so you can watch the various rooms in the villa. Your job is to record enough evidence to prove that one of the guests at the villa is capable of murder, and you must protect the potential victim.

This involves following characters between the different rooms, watching what they get up to, recording their transgressions, and then take the appropriate course of action. All this takes place on the night that the will of the deceased is read, so there are a fair few folks to keep tabs on. Look through a window when someone is there, and you'll be presented with a piece of video footage, to keep you help up to date on who's murdering who. So, get snooping. Oh, hang on. I've just realised that I can categorize Voyeur II after all. It slots quite neatly into the 'completely crap' category.

Yes, crap. Complete and utter crap. Voyeur II is quite possibly the worst game I've ever had the misfortune to play. If you can call it playing. The game has so many faults, I don't know where to start. But, I suppose I have to provide some justification for slagging it off, so I'll try to explain why it's such a load of rubbish.

For a start, there's the incredibly poor instructions. There's a thin in-cd manual, which explains about 0.00001% of the game's features. The cabin is filled with a number of objects, each with different functions, yet none of these are even mentioned in the manual. The 'solar power' thing, is a typical example.

Because your cabin is in such a remote place, it requires solar power to keep the camera, radio and other devices in operation. However, the manual ignores this fact. There's no mention of how to get more power, or what the controls on the solar power control box actually do. I spent ages fiddling with the settings, to no obvious effect. I just ran out of power in the middle of the game. Even the readme file provided no information at all. There's also a gun on the wall, held by a combination lock. But what's the combination? How do you get it? What are any of the major pieces of equipment in the cabin for? I'm not asking for a 380 page manual, but to leave out this much information is unacceptable.

And then there's the video. Putting aside the quality of the acting, the video is utterly appalling. No way can they tell me that the hyper clear video shots on the back of the box even resembles the stuff you get in the game. It's blocky as hell, with horrible splotches of colour all over the screen, and on top of all that, it's all in glorious jerk-o-vision. And this is on a Pentium 133! My 486 could even manage to play the majority of film clips and animations at an acceptable rate. So what's the problem? Good grief.. the Mega CD managed better than this.

Then there's the 'gameplay'. The whole thing has to be 'played' from beginning to end in one sitting. You can't save the game at all; mess it up, and you have to start all over again. And watching endless video footage, starring 'B' list actors and actresses isn't my idea of gaming. At least with the admittedly poor Night Trap, you could press a button and pretend you were helping clear up the bad guys. In this game, all you do is sit back, and hope you've got the right footage to convict the baddies. If you can stay awake through the unoriginal storyline. Columbo would turn in his grave. If he was dead. But wait.. there's more - listen to this blurb from the manual:

Er, no. What is actually likely to happen is, everyone gets totally bored, and loads something else instead. And what strategies? 'Oh, which window shall I click on next. What do you think, lads? Lads?'

You've probably gathered by now that I don't like the game very much. It doesn't have a single redeeming feature. Except perhaps the almost comical way in which the various folks bonk each other at every opportunity. It's more like a carry on film, but at this price, it just isn't funny. Oh, and an average game lasts about 25 minutes. And it comes on 2 CDs.

Basically, Voyeur II is utter dross. There are many better games on the market. If you want an adventure game, there are lots of other titles, and if you're desperate for a little detective work, you could try Spycraft, or Cruise for a Corpse. Considering that Philips saw fit to spend their cash on making/converting this, I'm not surprised the CD-I bombed. Avoid this pile of parrot droppings at all costs.

Share your gamer memories, help others to run the game or comment anything you'd like. If you have trouble to run Voyeur II, read the abandonware guide first!

We may have multiple downloads for few games when different versions are available. Also, we try to upload manuals and extra documentation when possible. If the manual is missing and you own the original manual, please contact us!