Alien Trilogy is a lackluster first-person shoot 'em up that is a disappointing waste of the blockbuster license.

Very loosely based on the three existing Alien movies, the game casts you as Ripley, space marine heroine who is sent with fellow marines into the colony on planet LV246 to discover why communication has been lost. Of course, the menacing Aliens are behind it, but the story thankfully takes a few twists and turns along the way - albeit not in unexpected directions.

Alien Trilogy offers about 25 levels, split into 3 parts similar to DOOM episodes. The first part take place in the colony from the movie, the second in the prison colony taken from Alien 3, and the third and final part takes place in the alien ship filled with nasty eggs that we all remember so well from the first movie.

Although released a few years after DOOM, Alien Trilogy looks and plays much more like DOOM than contemporary games like Quake or Duke Nukem 3D. The graphics are only passable - the aliens and wall textures become horrendously pixellated when you get too close, and sometimes it is difficult to distinguish scenery from objects you can interact with.

You are given an objective at the beginning of each level. These range from killing all Aliens in sight, to collecting identity tags, activating lifts, and others. However, you can finish the levels without finishing any of these objectives - just make your way to the exit and hop into the lift. This makes objectives redundant... I suppose they are there only as "additional challenges" to die-hard action gamers.

Even die-hard movie fans will find Alien Trilogy thoroughly boring. Even the Alien DOOM .WAD some fan created years ago plays much better than this average underdog that comes very close to meriting our Real Dog tag. Acclaim could have done a much better job.

If you want a fun and appropriately scary Alien game, play Sierra's superb Aliens vs. Predator series instead and leave this one alone. 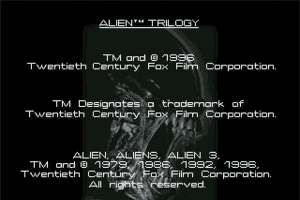 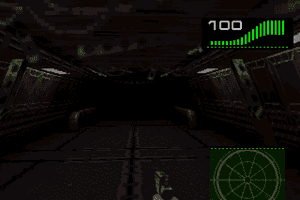 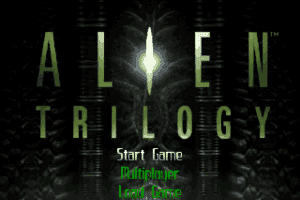 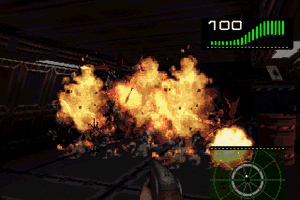 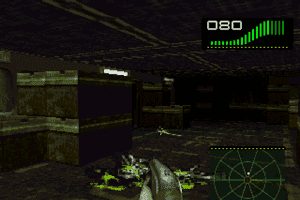 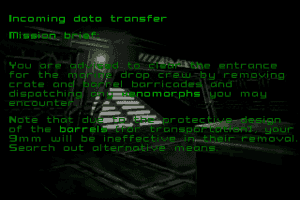 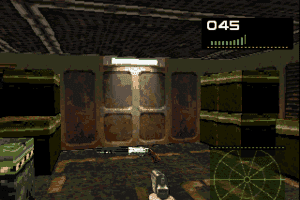 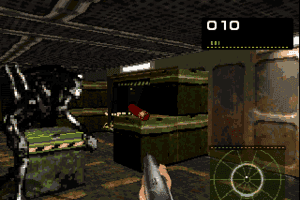 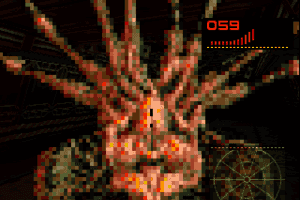 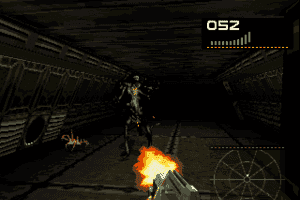 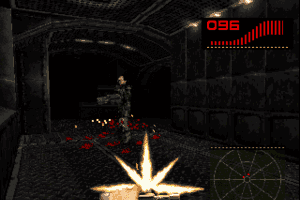 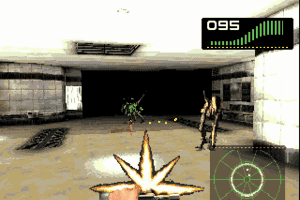 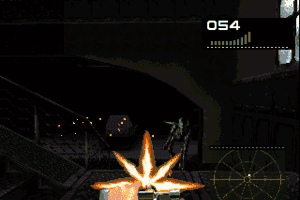 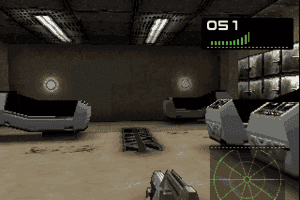 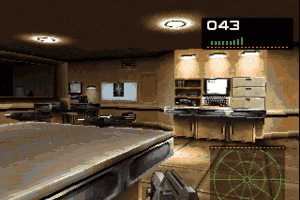 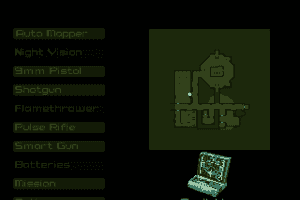 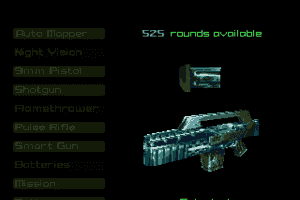 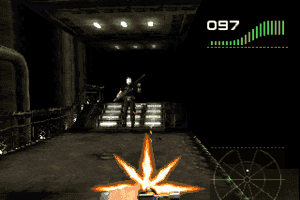 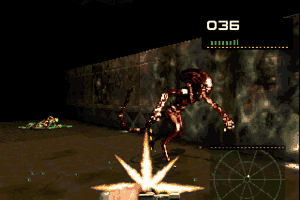 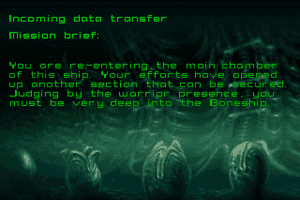 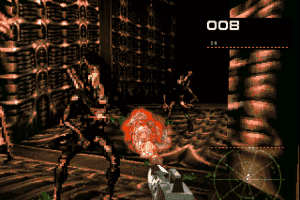 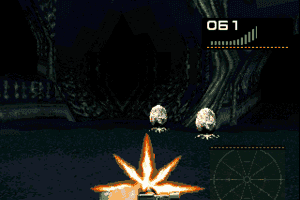 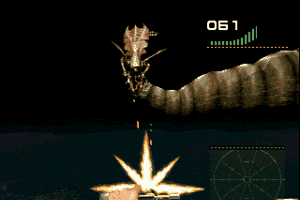 I downloaded the ISO DOS version and it does not work on DosBox. It loads into DosBox, but when I start the game, it crashes after a few seconds of a blank screen. In looking ayt the package, it looks like all that is in there are tracks of a DVD. There should be something to make the tracks run I would think.

An ex girlfriend of mine had a vagina that looks like the face hugger in the ninth screenshot. Did the same thing too. Wish Michelle had one. A vagina that is.

A decent play. But seriously no save game? What on earth is that about? Maybe I'm trigger happy but I ended up running out of ammo after the first 3 levels. :(

Game's too fast. Enemies are on to you too fast. Not really a good game. Graphics are terrible, even for its time.

I actually found myself really enjoying this game. I haven't even played or watched any other Alien games before this one. However, I think the sound might be glitched because it's all high pitched. I'm not sure if it was supposed to be that way or not, and if not I don't know how to fix it. It's still a fun and challenging game, regardless.

How do i make this game work?? the Wtrilogy.exe won't install nor play the game.

"A Cult-classic is born."

Granted, I didn't play this back in the day (no nostalgia for me), but it really is an awful game. The maps are very repetitive and way too dark (very difficult to navigate), the controls make you feel like you're not in control, and the enemies take way too many hits (if you can even hit them).

The most annoying aspect of this game, however, is the fact that you can fire your weapon and watch the projectiles float over to the target. Seriously? Why would they even think to do something like that? Remember in Aliens when the men... yes, and women... (what an imagination that James Cameron has...) of the United States Colonial Marine Corps had so much trouble hitting their targets because their bullets were too slow to keep up with the lightning reflexes of the xenomorphs? Yeah...

Very often underrated! I always loved the whole Alien franchise and especially James Cameron's Aliens, what was obviously the main influence during creation of this game...

Ok, the level design is really dull sometimes (but the same problem you got on the much time later released Alien vs. Predator, and there it REALLY sucks) and also the enemy sprites look a little bit undetailed sometimes, but it's a nice action game and for people who are into Doom clones OR the Alien franchise (or, like me, into both as well) already worth a look! ;)

easily a great Alien game. also has one of the scariest parts in a game: when the facehugger crawls across the screen. made my skin crawl.

Used to play it a lot. Quite atmospheric shooter.. Unfortunately, the amazing soundtrack is missing here. You shouldn't play it without music..

Share your gamer memories, help others to run the game or comment anything you'd like. If you have trouble to run Alien Trilogy, read the abandonware guide first!

FixFixes for EU / US version of the game 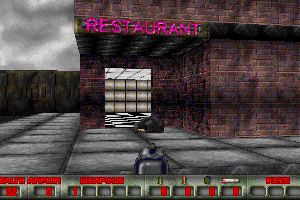 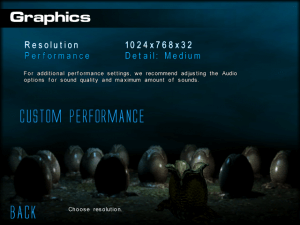 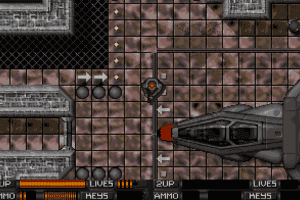 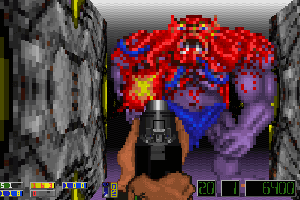 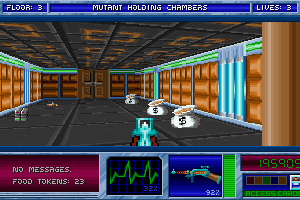