Description of Blackstar: Agent of Justice

BlackStar: Agent of Justice is a mediocre shareware adventure game that squanders decent graphics and puzzles by cramming just about every 20th century stereotype you can think of.

Written by heavy metal musician Thomas Vitacco in his spare time, BlackStar stars you as a grizzled private detective with American Indian blood named BlackStar. The game starts out as just another day in a life of a PI. But it's not long until you stumble upon a gruesome murder and a more sinister plot. The graphics and attention to detail are definitely the high points of BlackStar. The graphics are very well-drawn, especially considering that this is essentially a one-man product, and there are many specific responses/retorts to your actions as opposed to the stock “you can’t do that” or “there is nothing to see here” responses in most adventure games. Unfortunately, the user interface is far from intuitive: you have to right-click to exit any screen or cancel actions – a very cumbersome requirement that will take adventure gamers some time to get used to. Where the game suffers is that most important element in adventure genre: storytelling. Although the plot is no more hackneyed than most games, BlackStar is full of stereotypes that seem to exist only to gratify a hormone-surging, sex-deprived teenager who might happen to be playing it. For example, you can peep into people’s room by using the binoculars in the park. Most of what you see are either nude women or other “adult” scenes – nothing important to gameplay at all. The fact that you can’t see these scenes (or visit some of the more raunchy places on the map) until you play the paid, registered version is further evidence of how the author considers “sex themes” to be a more important selling point than, say, a “good story & logical puzzles.” That doesn’t bode well for gamers. And indeed, the more you play the game, the more it will begin to annoy you. Just when you get used to the quirky right-click interface, you will be frustrated at how illogical it is. Like most other adventures, BlackStar is extremely linear. But instead of developing the story in a gradual, natural manner as in most games, here it is very illogical. If you try to do anything that is not directly the next step in advancing the plot, BlackStar will say something along the lines of "I'd rather not". When you do the exact same things after the plot has been advanced (sometimes without your knowledge), he will inexplicably be able to do it. As a result, most of the game it’s just a matter of trying to click everything (and also use everything in your inventory on everything else, because many puzzles don’t have logical solutions) until you advance the plot. Can we say “bad game design”?

Overall, BlackStar is just plain disappointing. As a murder mystery/private eye adventure, it’s not as logical or fun as Pleurghburg: Dark Ages, a freeware game. As a game that tries to “adult themes” of sex and violence, it’s as superficial and banal as Interplay’s Voyeur games, and much less funny even than Steve Meretzky’s notorious Leather Goddesses of Phobos 2. It tries to be cynical, sarcastic, and witty – and fails at all three. If not for the clean graphics and some decent puzzles, it would certainly be a Real Dog in my book. 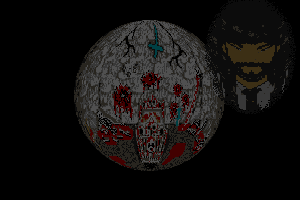 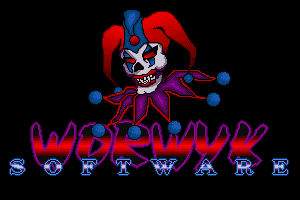 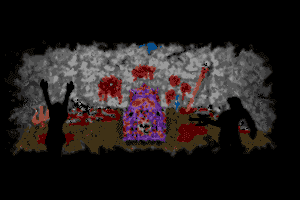 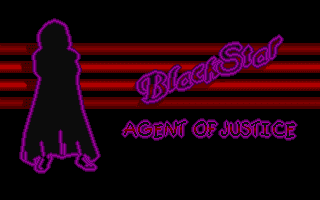 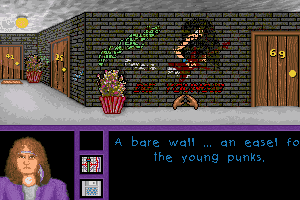 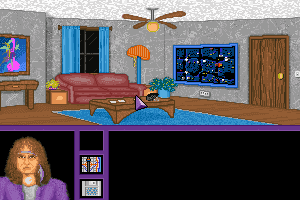 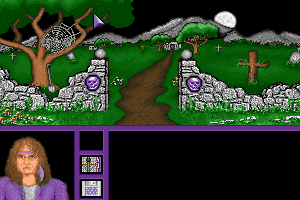 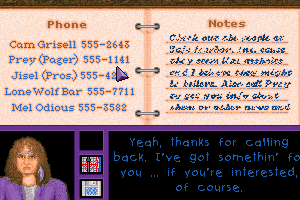 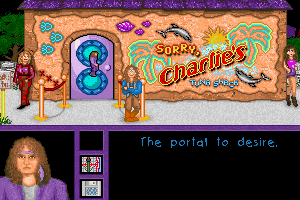 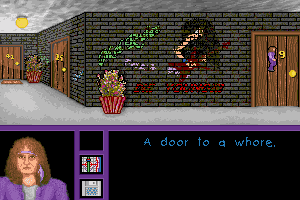 For anyone having issues with the sound on this one, make a file in your blackstar episode 1, call it start.bat and add these lines:

then point your dosbox.conf file to the start.bat file you just made, you can play episode 2 in the same way....presto soundblaster...thank me later!

Wasn't a huge fan of this one, personally. Felt like it banked too much on being edgy, and not enough on being good, with the touted "adult" material coming off as cheesy and over the top.

This game is quite fun. Too bad its short though. The thing I didn't like was having to right click each time after text appeared. sometimes it was a little buggy during emulation where if you held right click too long (.5 seconds or more?) it would skip many paragraphs. Which may be happening because the emulation speed has to be increased to play the game. Either way, its still fun.

There is however adult material in the second episode of the game, also in this zip file, which may not be suitable for children, and it does warn you before you play it.

Share your gamer memories, help others to run the game or comment anything you'd like. If you have trouble to run Blackstar: Agent of Justice, read the abandonware guide first!