One of the most innovative-- and obscure-- interactive titles ever made, Pryority Software's Forbidden Quest is an ambitious sci-fi game that features many innovations, but falls a little flat from a few uninspired and obscure puzzles.

The plot is typical enough: you are an intrepid space explorer sent to the United Alliance of Planets to find a powerful alien race to mine their knowledge necessary to restore order to the Alliance. Before you know it, you find yourself crash-landed on an unknown planet, with nothing but a trusty blaster and wits to help you survive...

In many respects, Forbidden Quest is a standard text adventure, with a parser that is adequate, but somewhat inferior to Infocom's (it doesn't recognize pronouns, for example, or abbreviations such as "x" for EXAMINE). Puzzles are generally fair, although the existence of one (very huge) maze is a downside.

What makes the game different, though, is the ingenious use of Artext prints -- five color drawings included inside the game box that provide clues necessary to pass certain scenes. This combination of software and drawing adds a nice touch to the game, and makes it a unique adventure. Finding clues in these prints is a lot of fun-- too bad there are only five of them.

The plot and character interaction are a bit weak, but overall, the game has enough interesting puzzles (including some optional ones) to keep me interested to the end. Thumbs up! 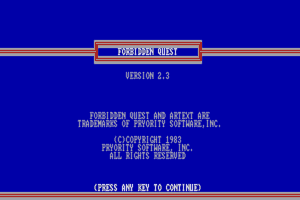 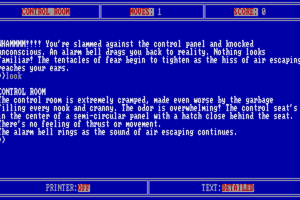 I uploaded this to HOTU years ago. Without the artext prints you're stuck. If you need these, try HOTU for the download. This was taken from that site and placed here for some unknown reason. PS: I OWN this game in mint condition.

Share your gamer memories, help others to run the game or comment anything you'd like. If you have trouble to run Forbidden Quest, read the abandonware guide first! 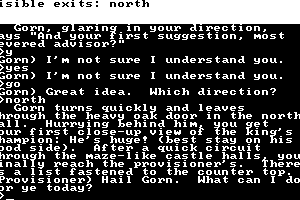 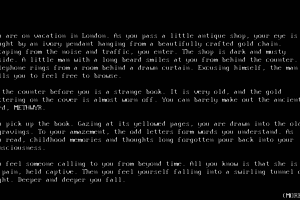