Depicting a teenager's life (typically the designer's) seems to be a popular topic for amateur adventure games, and Hank's Quest is no exception. You play a geeky, lanky teenager named Hank who must organize a party in his house to please his mother, who's accused him of not being as sociable as his younger brother, Paul. Hank's Quest is an okay adventure -- it has okay puzzles, passable characters, and competent writing. Unfortunately, the game's text parser is simply not intelligent enough to understand the most basic of commands, making the game more frustrating than it needs to be. Some of the puzzles are also quite illogical. For instance, in a nod to LucasArts' adventures, you will at one point explore a complete dark room for which all commands except TOUCH and LEAVE are not recognized. The only "puzzle" here requires you to move little by little, "TOUCH"-ing randomly as you go, until Hank finds a useful item in the room. On the plus side, the graphics in Hank's Quest is more detailed than most fanmade AGI games -- almost on par with Sierra's adventures, in fact. There are many objects to interact with in each room, with many entertaining comebacks that are not default "you can't do that" response (when you try to take the garbage bin, for example, the game exclaims, "this is not Space Quest II!"

Overall, though, the game's overly simplistic parser makes it less enjoyable than it should be. Worth a look if you like Sierra's parser-based games, but be prepared to paraphrase your sentences very often throughout the game so the stupid parser can understand ;)

Note: The latest version of the game (v1.1) fixes a lot of bugs and typos that made the first release annoying, particularly the phone puzzle and GIVE X TO Y sentence structure. This makes the game much better than before, although still not really a Top Dog in my book. 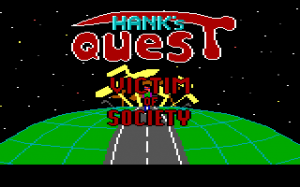 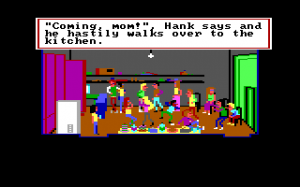 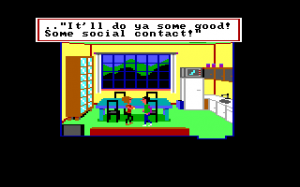 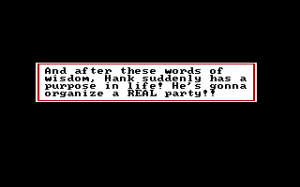 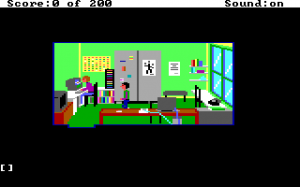 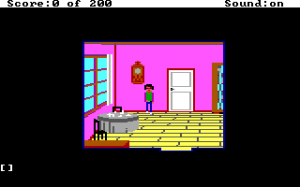 Share your gamer memories, help others to run the game or comment anything you'd like. If you have trouble to run Hank's Quest: Victim of Society, read the abandonware guide first!