Description of Once and Future

Uncontested winner of the “longest time in development” award for an IF title, Once and Future is a top-notch game by Gary Kevin “Whizzard” Wilson (GKW).

First announced as Avalon in 1993, the author put the estimated development time at “two months.” Five years later, in 1998, the game was released as shareware by Cascade Mountain Publishing (CMP), to huge critical acclaim from the IF community, although some felt that the game did not exactly live up to its five-year hype.

Possibly the last commercially sold interactive fiction game, Once and Future will likely remain memorable for several reasons. A gripping story combining Arthurian myth and modern-day events, GKW's sophisticated prose, puzzles that are agreeable to beginner adventurers as well as die hard IF fans, and a healthy dose of humour are the trademarks of this game.

The story starts out with you as a soldier and your buddies waiting for ambush in your tent, somewhere in Vietnam. As scary as this situation is, soon you will find out that you have much more to worry about than mere survival. During your adventure you will visit wonderfully detailed locations, meet heroes of legend, and will be very busy becoming one yourself. Saving two worlds, getting involved in the story of Arthur, Merlin and the Holy Grail is surely a time-consuming task, so expect to spend a good amount of time on this game.

Nice little touches, like the replacement of the usual point system with military ranks, and some informative notes not directly related to the story add a lot to the gameplay. Whatever you may be looking for in an adventure game you'll likely find it here; an epic storyline, huge gameworld, interesting puzzles lifelike NPCs, and multiple endings are all there to please a wide variety of gamers. Treatment of NPCs in Once and Future merits a special mention. Simply put, the NPCs have the most varied conversation topic lists and behaviours I have seen in any IF game to date.

The writing also deserves high praise for being very evocative and atmospheric. The scene at the Crossroad of Dreams, in particular, is breathtaking. GKW certainly knows a lot about Arthurian myths, and knows how to recast them in different lights, whether faithful or adaptive, to suit his game.

Aside from being an overall great game, Once and Future also has a unique historical value for being developed during the "Dark Age" of IF, when games where far between and the genre was believed to become extinct by many. The recent re-release of the title as freeware (after the demise of its publisher) is surely a happy occasion for anybody slightly interested in text adventures.

Here is your change to get immersed in a truly inspired piece of IF that deftly juxtaposes history with myth. Highly recommended! 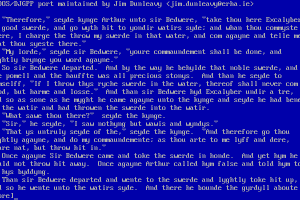 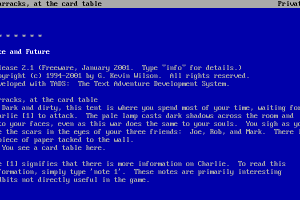 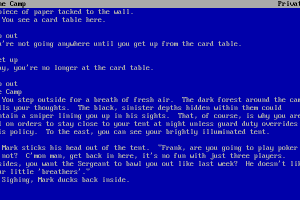 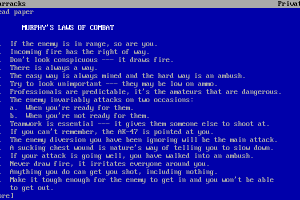 This got mixed up because the game used to be named Avalon. Uploaded the right archive, ty anon!

This is a different game called Avalon. It looks to be a Ys RPG clone whereas the description says the actual game is a text adventure.

Share your gamer memories, help others to run the game or comment anything you'd like. If you have trouble to run Once and Future, read the abandonware guide first!