Christmas comes but once a year, much to the disappointment of toy manufacturers for whom that particular time year is a real moneyspinner. Every year it's the same - there's always some 'new' toy range, overmarketed and overpriced, that is guaranteed to make it onto childrens' Christmas lists. One year it was Buzz Lightyear, last year it was Teletubbies toys, and this year - who knows? My money's on the 'Small Soliders' range of toys being this years big seller. But by the same time next year, these faddish toys are forgotten about - it's the same every year.

But there are a few exceptions - there are some toys that make it onto kids' Christmas lists every year. Large quantities of Barbie and Sindy dolls are sold each Christmas (according to figures I just made up), and they've never really been out of favour with kids (girls, at least). Radio-controlled cars are another top seller - even if you do end up spending ten times the value of the car on batteries - guaranteed to keep kids amused for weeks and perhaps months. Granted, the local wildlife may receive the fright of their collective lives, but it's a small price to pay for keeping your normally hyperactive kids busy.

And evidently, someone at Gremlin whiled away many hours playing with his or her remote-controlled car, since Gremlin's latest game, Buggy has you racing remote-controlled buggies around a variety of tracks. But given that the tracks in Buggy are slightly out of the ordinary, the levels including as they do, giant mushrooms, huge crab pincers and other odd trackside obstacles, I can only assume that someone was regularly lacing the aforementioned person's Vimto (TM) with mind-altering substances. Either that or they had a particularly vivid and unconventional imagination.

Whatever the reason, there's no denying that Buggy isn't your run of the mill racing game - there are no Formula One cars or futuristic vehicles, no supercharged Porsches, no pit stops and no pedestrians to mow down. But despite (or perhaps because of) the absence of all these things, Buggy is actually a rather funky game.

While Buggy may not break the arcade racing game mould as Carmageddon did, it nevertheless jumps up and down on it quite hard and boots it around the room a good few times. Buggy sports quite a few original features that do set it apart somewhat from other offerings.

For a start, there's the fact that you're not driving around in a car or other vehicle - you actually get to 'drive' one of several radio-controlled buggy, each of which have their own pros and cons. This doesn't just mean your vehicle looks different - it means that it handles differently. Whereas in other racing games (barring the rather poor Hardcore 4x4 and the pinball power-up in Carmageddon), you knew your car wasn't likely to go ricocheting off walls, be hurled high into the air, or tip over backwards; in Buggy this certainly isn't the case. Due to the small size of the vehicles in Buggy, you can find yourself losing control of your car as you belt round the levels, a situation not helped by the less than friendly layout of the game's tracks.

Having mentioned the presence of giant mushrooms and crab pincers in some of the tracks, you may have gathered that Buggy's levels aren't entirely flat and lifeless. Instead, they're full of hills and hazards, twists and turns and all manner of features guaranteed to make life hard for you and the three computer controlled buggies that you race against.

The levels are well designed and get increasingly challenging as you progress through the game - you'll have to keep on your toes to stay ahead of the computer drivers who are more than capable of dealing with the tracks, although it is refreshing to see that they still do come a cropper once in a while. Unlike Carmageddon you can't wander miles off the track, but you can cut corners in a few places, something that becomes increasingly important as you strive to keep ahead of the pack.

The levels are themed, and you'll find yourself driving around beaches, and haunted forests to name a few, all looking suitably picturesque, gritty and spooky respectively - although I would have liked to see perhaps one level which had you racing your cars around a semi-realistic toy-car style environment, a bit like the levels in Codemasters' Micro-Machines.

Another original feature of Buggy - original for a racing game, at least - is the fact that the tracks are connected together in hubs. You access the tracks by driving round the hub and nipping through the track portals, and to complete one hub you have to come first in all the tracks. You can then access the next hub, which contains harder to negotiate tracks. After completing each hub you get a new buggy, more powerful than the other six or so buggies available to you when you start the game - the effect of this is reduced because on each new hub the enemy buggies get progressively harder to beat, and they start using better buggies too. Your 'new' buggy just allows you to keep up with the Joneses - if the Joneses drove coloured buggies and lived in a strange vaguely hallucinogenic world.

Once you complete all the hubs, you can move onto the second challenge which includes the original levels and some more new levels. Or, once you've completed at least a single hub, you can try the time challenge and exploration mode which is particularly handy for finding the various secret areas in the game, of which they are over one million. Probably. Okay, I admittedly haven't found a single secret yet, but that's in no way an indictment of my gaming ability.

Aside from hunting for secret bits and taking on computerised opponents, you can also participate in some multi player racing. If you have access to a network or can track down a Buggy Internet server, you can take on up to four players, while, if you only have the one PC (like 99.99% of people in the entire universe), you can still take on another player using the groovy split screen mode, something that should be featured in more games - it's all very well harping on about multiplayer gaming being the future, but how many people have access to a fast network or can actually manage to get a consistently fast connection to a game server somewhere in New Jersey?

And multiplayer in buggy is rather fun, although the downer is that, in split screen mode at least, you can't race against just your human opponent, there are always two computer opponents in the race as well, which could lead to the rather bizarre situation where neither you nor your human opponent win.

If you do find yourself lagging behind in Buggy then all is not lost - you can use the rather groovy power-up gates to give yourself a boost. This is another of the original features that makes Buggy fun to play - each level contains several coloured power-up gates which when driven through give you a colour power-up. Certain colour combinations, only a few of which are listed in the manual, will temporarily give you extra abilities, which are handy for getting the drop on your opponent. The downside to this is that you may lose precious seconds swerving to nip through the power-up gates - it's up to you to decide whether doing this is worth your while.

As far as the game's graphics goes, Buggy looks rather funky - the levels are extremely colourful (except the ones at night), and the game supports 3DFX cards; in fact without one, you could end up running the game in the playable but less pretty software mode.

On the musical front, there are plenty of funk-style tracks which are played throughout the game, perfectly suited to the psychedelic bounciness of Buggy. But while nice graphics and groovy tunes are all well and good, they're not much help if the game's crap. But fortunately, for Gremlin's accountants and gameplayers in general, Buggy is actually a top quality race-em-up, chock full with playability, and sprinkled with a liberal helping of originality and hidden features - or is that an ice-cream sundae?

Buggy is certainly one of the most entertaining racers around (although I may yet defect to Carmageddon 2 when its released). Whether you're planning on playing with yourself or with a friend, Buggy is fun, playable, original and well worth picking up. 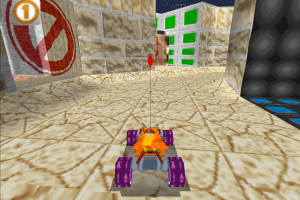 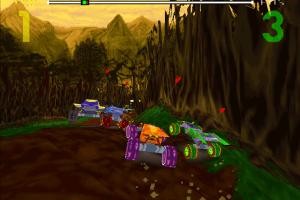 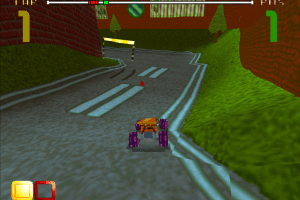 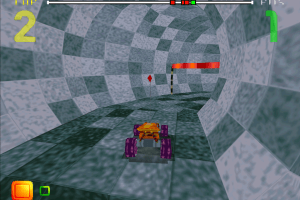 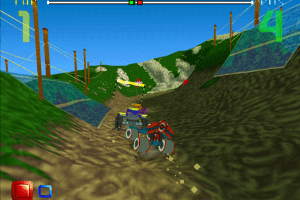 Seriously underrated when compared to Re-Volt. It's not without its faults, but god damn it has a lot of charm.

Is it possible to play it on a modern computer?

Share your gamer memories, help others to run the game or comment anything you'd like. If you have trouble to run Team Losi RC Racer (Windows), read the abandonware guide first! 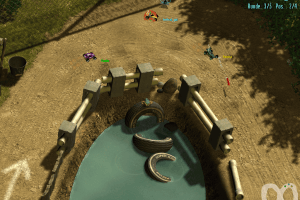 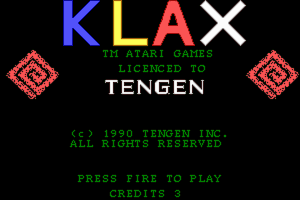