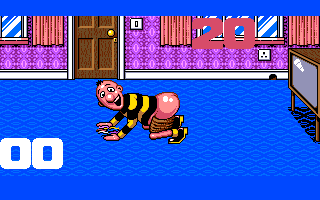 Description of Viz: The Game

Viz is a funny, politically incorrect action game based on a popular British magazine of the same name.

For the uninitiated, Viz is produced in Newcastle upon Tyne, England. According to the official website, Viz was "...born in 1979, it continues to avoid topical political satire, instead concentrating on cheap laughs about farting, swearing and turds [so in that sense, it is more closer to home than U.S.' MAD - reviewer]. Each 48-page issue is a subtle blend of cartoon strips, joke articles and adverts, photo-love stories, readers letters and tips, crap jokes and prize competitions. Viz is published once every two months, and is available in all good newsagents - and most crap ones -for ฃ1.85 (price correct at time of typing it in), $3.95 in the USA."

The game itself perfectly captures the spirit of the magazine. All the three main characters fans have come to know and love (or loathe) are here: sexist Sid, promiscuous Fat Slags, and flatulent Johnny Fatpants. You first pick a character, then progress through a number of mini circus-style games. The fun is in watching each character displays or exploits his infamous personalities in different games, although the games themselves are more derivative than inventive.

All in all, though, Viz probably appeals to anyone who don't mind a fair amount of swearing, farting, and various disgusting objects. It's certainly a different, "cult" game that all Monty Python fans, and fans of British humor in general, will likely enjoy for a short while.

Have fond memories of winning the race on my massively oversized testicles. Good times.

I love the viz games

I like viz games I've got most of the books

Launch it with dosbox and it works !

cant get this one to work... gutted remember playing this on my brothers amiga as a kid, after an advertisement i get returned to windows

Share your gamer memories, help others to run the game or comment anything you'd like. If you have trouble to run Viz: The Game, read the abandonware guide first!

We may have multiple downloads for few games when different versions are available. Also, we try to upload manuals and extra documentation when possible. If the manual is missing and you own the original manual, please contact us!