Merlin's Apprentice is a delightful collection of challenging puzzles designed by Cliff Johnson, of The Fool's Errand fame.

The premise is not as original as Cliff's previous games, but is well executed: you are a budding sorcerer who aspires to become apprentice to the legendary Merlin. In order to attract the attention of the mysterious wizard, you must prove your worth by weaving magical spells. There are thirty puzzles in Merlin's Apprentice in all, of about eight different types. There are some action puzzles that require you to click on objects that float by, several logic puzzles that involve moving objects into a certain configuration using only a few types of movements, and word puzzles requiring deciphering some encrypted sentences. The game has three difficulty levels which can be set on a puzzle-by-puzzle basis and changed during the game. The puzzles in Merlin's Apprentice, though fewer in number and in general easier than those in Cliff Johnson's previous works, still present some intriguing challenges to be overcome. The logic puzzles present the most challenge, often requiring the player to carefully arrange each move to produce the desired result. The action and memory puzzles seem like filler, padding out the game. Some additional types of puzzles would have been welcome to add more variety. The cleverness evident in 3 in Three and The Fool's Errand is missing from the more straightforward puzzles found here. Also, the beginner and advanced difficulty levels make the game far too simple and should not be used, at least not without first trying the expert setting. You'll get a lot more satisfaction at the expert level. There are 12 save game slots, and the game uses an automatic save. Once you complete the game you can replay the puzzles, but without the reward animations. Unfortunately, the state of partly finished puzzles is not saved when you close your game. Though shallower than Johnson's previous work, anyone who enjoys puzzles such as those that appear in Games magazine will find Merlin's Apprentice a welcome diversion. The game also sports excellent production values, as the animated cutscenes are very enjoyable, and take full advantage of CD-ROM storage capacity. Two thumbs up! 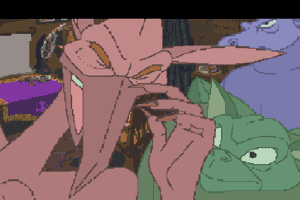 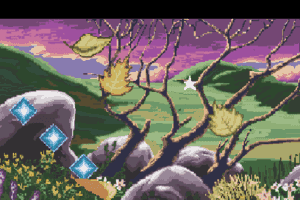 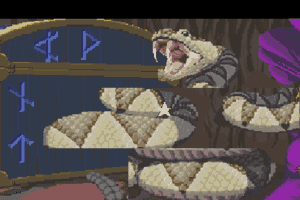 Share your gamer memories, help others to run the game or comment anything you'd like. If you have trouble to run Merlin's Apprentice (Mac), read the abandonware guide first! 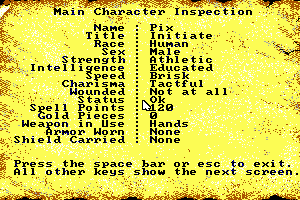