In recent years the gaming community has come to view any game with the words "Star Trek" in the title as pariah, unworthy of even a second thought. This rather harsh judgment is not entirely unwarranted. Past efforts to cash in on the popular Star Trek license have resulted in a long string of games ranging in quality from slightly above mediocre to downright poor. This persistent gaming curse on the Star Trek franchise has seemingly been broken, however, with the recent addition of several well done titles to the inventory. Among them are Voyager: Elite Force, Starfleet Command II: Empires at War, and Armada (of course there's also New Worlds, but they can't all be winners), as well as a number of upcoming products that show great promise, including Bridge Commander, Dominion Wars, and Away Team. The most recent Star Trek release is Deep Space Nine: The Fallen, developed by The Collective and published by Simon & Schuster. So how does The Fallen fare in comparison to these other titles? Well, suffice it to say that, what Elite Force did for Star Trek in the first person shooter genre, The Fallen accomplishes in kind for the third person action/adventure genre.

The events depicted in The Fallen tie into the Millennium saga, a trilogy of Star Trek paperbacks by Judith and Garfield Reeves-Stevens, published by Pocket Books and Simon & Schuster. Fans of the now defunct television series may recognize some of the plot's key elements: the Pah-wraiths, a race of all-powerful aliens exiled from the wormhole (or the Celestial Temple, as the Bajoran religious sect refers to it) by the Prophets, are on the verge of returning. The keys to unleashing and harnessing their power are three ancient red orbs. Playing as Sisko, Kira, or Worf, you must race to find the orbs against a host of opposing forces that would abuse their power to dominate the Alpha Quadrant and all of its inhabitants.

Of note is the fact that your three player choices do not merely give you the option to change the character skin. There are separate levels and unique mission objectives for each character. Of course, the events portrayed in each of these three character's levels are interrelated. For example, in the course of one of the Sisko missions, you contact Major Kira and coordinate a plan whereby she will sabotage security systems to allow you access to a certain area. When you get there, this has been accomplished for you. If you later go back and play the Kira missions (and I assume you will), however, you will receive the message from Sisko ordering you to disable the security systems for him and, playing as Kira, you must complete this task as your mission objective. There are similar connections between the Sisko/Worf missions and the Worf/Kira missions. These three separate "chapters," while not necessarily complete games in their own right, provide a fair degree of additional longevity to this single-player only game. The manual recommends that you play through the game in its entirety as each of the characters in turn, which is how I completed the game.

Visually, The Fallen is rather impressive. It sports an enhanced Unreal Tournament engine under the hood, which adeptly supplies delectable character skins (with beautifully sculpted facial features and expressions), expansive exterior environments and meticulously detailed interiors (including extensive maps of the DS9 station, the U.S.S. Defiant, a Bajoran monastery, a secret Cardassian military base, a hostile alien jungle, a Jem 'Hadar internment camp, and more), and some nicely textured effects with considerable amounts of eye candy.

Some of the enhancements to the Unreal Tournament engine include a custom-designed inverse kinematics and bones animation system that provides fluid character movements and ambulatory dexterity. Although The Fallen is presented Tomb Raider -style in third-person, it doesn't suffer from many of the problematic perspective and control issues common to this genre. The most significant distinction between The Fallen and Tomb Raider is an improved "over the shoulder" camera technique that avoids disorienting camera shifts in mid-maneuver. This sophisticated system also prevents the character's head from obstructing the view (a much needed feature, particularly since Sisko's substantial bare pate would block the entire screen at times without it). Whenever you back into a corner or against a wall, the camera zooms forward and your character becomes transparent (similar to a technique used in Indiana Jones & the Infernal Machine or more recently, Rune), allowing you to maintain visibility at all times. This feature is especially helpful since, although The Fallen is not your average shooter, shooting still plays a significant role in the gameplay. The only time view obstruction becomes a slight problem is when entering interior doors, however, I never experienced an incident where this occurrence was a decisive factor in combat.

The Fallen touts over ten weapons, including the standard Starfleet hand phaser, phaser assault rifles, grenade launchers, a variety of disruptors, gravitic mines, the deadly bladed Bat'leth, and more. There is also a plethora of twenty-fourth century gadgets, including the tricorder, communicator, medical hyposprays, PADD (Personal Access Display Device), shield emitter, and the exographic imager just to name a few. Over two-dozen alien races are represented in The Fallen, including Klingons, Ferengi, Bajorans, Cardassians, Jem 'Hadar, Founders, an all-new race of bio-analogous creatures known as the Grigari, and whatever species "Morn" belongs to.

In terms of enemy AI, I found it to be on par with most games but nothing particularly spectacular. The Grigari are hulking creatures but slow and deliberate in their advance. They are impossible to stop, however, unless you know the secret to doing it (and I'm not telling). Jem 'Hadar and Cardassian attackers utilize the same old strafing and rolls we've come to know and love (or perhaps hate) from Unreal. They will surprise you at times, however, by outflanking you from the rear, especially in enclosed areas with obstacles as opposed to wide open spaces. The hideous dog-beasts in the caves didn't pursue when I rounded a corner and were easily taken out with a few well-placed phaser shots. The flying manta rays are quick and can poison you. Once in your sights, however, they are disintegrated by a single phaser-rifle shot. There is a bar-slide control in the options menu that allows you to set the sensitivity of auto-targeting, much nicer than merely being able to toggle it on or off. Even after I discovered this and set the auto-targeting to zero, I was able to dispatch five or six rushing Jem 'Hadar without taking too much damage simply by using a rock and a tree for cover. Although the combat sequences are not exceptionally challenging, they're no walk in the park. On more than one occasion I fell victim to enemy phaser fire, particularly when facing off against multiple opponents.

The Fallen possesses outstanding graphics and balanced gameplay with proportionate amounts of combat, exploration, and puzzle solving. What really puts it over the top, however, is its reliance on a strong plot to keep the momentum of the game moving ahead. The intriguing and epic story arc is well scripted and includes plenty of twists and turns. Overall, The Fallen has the look and feel of a Star Trek feature film. This cinematic quality is further supported by a superb soundtrack. It is by far one of the best I've heard in a game. The musical score, which ranges in mood from introspective to foreboding to heart pounding, shifts seamlessly between understated ambiance and pulse-quickening intensity, providing a rich tapestry of sound, enhancing gameplay, and leaving no doubt that you have entered the Star Trek universe.

The audio not only includes excellent music, but some great sound effects as well. Well-known Star Trek sounds such as the transporter, phaser, and tricorder are authentically reproduced. Other sound effects, like the splashing as you run through shallow water, are also well done and contribute nicely to the overall sensation. One other note of key concern regarding the audio... the voice-overs are well done and lip synced with exacting precision. Star Trek fans will be rather disappointed to discover, however, that Avery Brooks does NOT provide the voice for Captain Sisko. Likewise, a stand-in supplies the voice acting for Chief Miles O'Brien. Die hard fans may balk at the idea entirely but I found that, although it took a little getting used to, the somewhat unfamiliar voices did not detract enough from the overall experience. On a positive note, the rest of the character voice-overs were done by the original actors from the television series cast.

My final verdict on The Fallen is this... it may not be in the running for "Game of the Year" but it certainly holds its own and is sure to be popular among a wide variety of gamers. The legions of loyal Star Trek fans are going to have plenty to drool over in this game (particularly having the opportunity to explore the DS9 station and the U.S.S. Defiant in 3D), but you don't have to own a pair of prosthetic pointed ears and a Starfleet uniform to enjoy the excellent gameplay. The Fallen is certainly worth more than just a cursory glance. Anyone who enjoyed the Tomb Raider series and who would welcome a science fiction twist will find Deep Space Nine: The Fallen an enjoyable and worthwhile enterprise (pardon the pun). 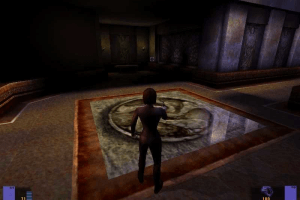 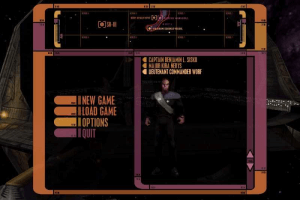 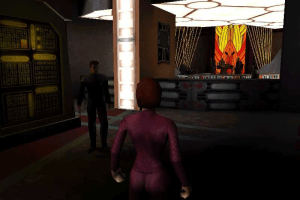 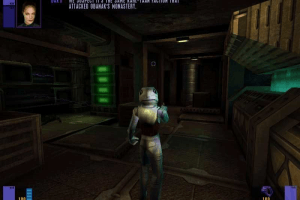 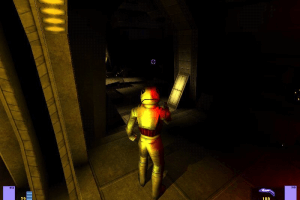 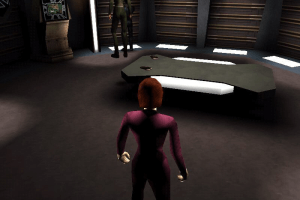 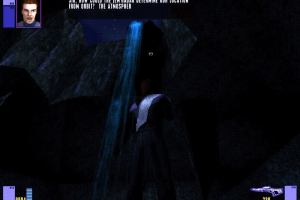 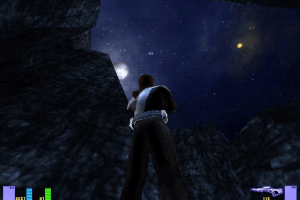 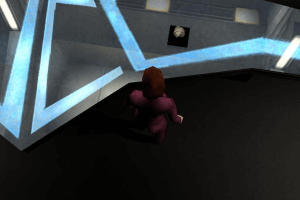 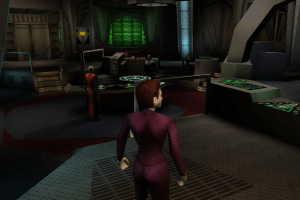 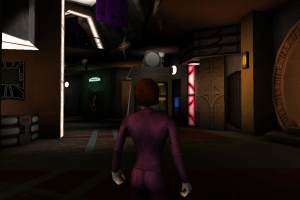 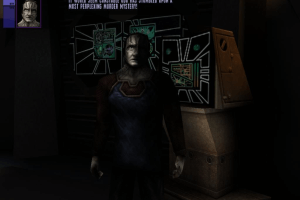 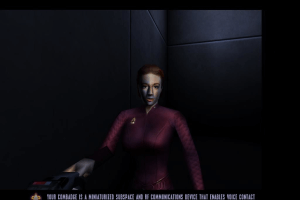 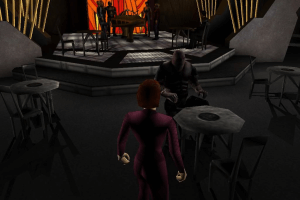 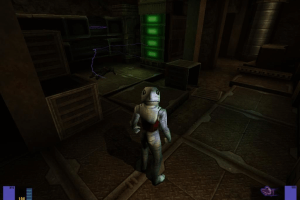 The game keeps crashing after a few minutes of perfectly smooth play, giving me a lengthy message that begins with:

My first interaction with the Star Trek series as a whole. The Fallen was built on the Unreal 2 Engine and utilized nearly all of the engine's capabilities at the time. The game features impressive lighting and sounds. The actual crew members from the Deep Space Nine show voice their in-game characters to reinforce the feeling of this being a true Star Trek adventure.

Anyone know where to get a PC version?

If this works, fantastic, This and Elite Force were the two best Star Trek games. Great combinations of great action, problem solving and strategy with vicarious thrills of hearing the original casts and roaming familiar virtual sets.

The file says it corrupted.

Share your gamer memories, help others to run the game or comment anything you'd like. If you have trouble to run Star Trek: Deep Space Nine - The Fallen (Windows), read the abandonware guide first! 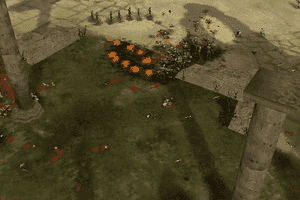 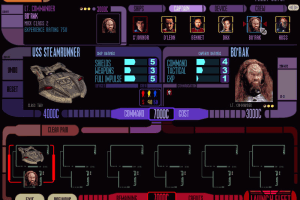 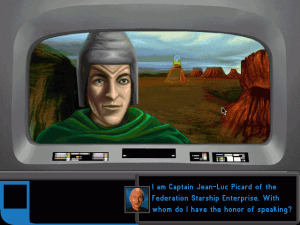 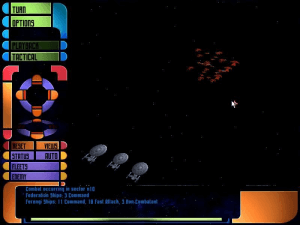 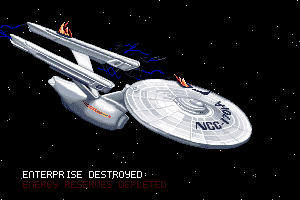