Y'know, it's very easy to get cynical about racing games. Sure, it has its fads and crazes like any other genre but it's easier just to think that developers are jumping on the latest bandwagon and hoping for success. I mean, just take a look at the number of rally games out there. Look how many off-roaders there are. And how many of these were around, say, five years ago? Not half as many by a long way. Mud plugging is the new Screamer, the new Need for Speed. If you can't go off-road or at least onto a gravel track you can forget it because people just don't want to know. Which is a shame, because they'd be missing out. You don't need chunky tyres and a sump guard to have fun, you can enjoy yourself with nary a tree in sight. At least you can if you're racing trucks.

Yes, trucks. Hit the 'back' button yet? No? Good, because these aren't your ordinary Eddie Stobart vehicles you see every day carrying illegal immigrants to our shores. Oh no. Strip the weight down to five tonnes (yes I know that's still a lot but it is a truck you see), stick a 12-litre engine under the bonnet, add a couple of turbochargers for good luck and you've got a fire-breathing 1360bhp-producing behemoth. Get another seven of these, put them on a track that can just about fit two side-by-side and send them barreling down a straight into a hairpin corner, take away any effective brakes and you've got Mercedes-Benz Truck Racing. Sound better now? It should do because it's every bit as barmy, madcap and fun as it sounds.

As it turns out, this isn't just something the guys at Synetic made up whilst trying to invent the world's most stupidly dangerous sport. People actually do race these things and Truck Racing uses the Mercedes-Benz license, which enables you to go through an actual race season using all the proper rules and reg's. Every little last detail is there, from the performance and handling of the trucks to the correct sponsor logos in the correct places. F1 fans might recognise some of the circuits Truck Racing uses, such as Catalyuna and the Nuerburgring, alongisde others you might not be familiar with, such as Belgium's Zolder or England's Donnington Park. Either way, the tracks are exceptionally detailed, rising and falling perfectly, apexes are spot on and you can even feel the camber of the bends as you belt round.

It's not just the circuits themselves, either. Potter about in practise mode (or even race mode if you fancy losing) and you can sneak off the track, wander around the paddock area or even drive along the bottom of the grandstand. Quite why you'd want to do this I'm not sure, but it just goes to show how much attention to detail has been put into the game and it's prevalent throughout; although for some reason, it was possible to drive on the pond at Zolder and I'm sure I managed to fall off a cliff somewhere else.

What you first notice is the superbly presented front end. Flashy options slide on and off the screen as you pass the mouse cursor over them, umpteen gazillion graphical and sound effect options bamboozle the eye and ear. And it's not just a case of all eye-candy and no substance - replays are available for your delectation, and you can even edit them with so much flexibility, it almost rivals Driver.

Practise any circuit you like, practise with any driver you like as the ghost, save a ghost trainer so you can load it later. Single races are available for the chronologically disadvantaged or you can choose the full championship mode. And we haven't even started on the options to modify your truck. It's got all the usual -suspension settings, tyres pressures and gear ratios but also more exotic stuff, like spring coil distance and how much fuel/water/brake fluid you want to carry. You can even adjust the anti-roll bars. Nor is it a case of them making bugger all difference once you're out and about -- setting up a truck properly can shave seconds off your lap although you can perform well enough without having to bother if you don't feel like it.

But what's for certain, and as you may have guessed with the number of options available, is that Truck Racing is no quick-fire action game. Not only your first few laps, but your first few hours will be spent merrily sliding off the track and into a wall somewhere, rather than hurtling around the circuit at record breaking speed. The first thing you realise as soon as you step onto a circuit is that these things have no brakes whatsoever. Brake too late and you won't just go in 'a little bit hot'; you'll go in, out, through some fields and into a farmyard 3 miles away! Nor can you turn in while still braking. If the steering wheel is anything but bang on centre, the back end will start to drift and it can be almost impossible to catch it. It takes heaps upon heaps of practise to start powersliding around corners, so if this isn't what you're after or you don't want to spend days learning how to do it, get something else.

Nor are the trucks what you could call 'nimble'. Understeer is the order of the day, served with lashings of 'no-grip-at-the-front' sauce and rounded off nicely with 'bloody-hell-it's-that-gravel-trap-again' pudding. You've also got to keep an eye out for the grass and white lines. Clip one of these on your travels and you'll spin it before you can blink. What all this means is you end up spending what seems like an eternity tiptoeing around the circuit, too scared to brake, too scared to dive into the corners and just generally bored with the whole affair.

But slowly, very slowly, things start to make a bit more sense. You begin to realise that you can turn in whilst braking as long as you're very gentle. The understeer tends to melt away once you've got the racing lines sussed and you can even, very occasionally, get a whopping great powerslide around a corner which, even more occasionally, you can control. And once you get into things, you'll even find these five-tonne monsters somewhat...lithe. You can squeeze into the tiniest gaps left by your frantic competitors and you can blast around hairpin bends rather than coming to a complete halt instead of gingerly edging your way around like you did at the start. It's from this point onwards that the game really starts to kick in.

You also realise that this is no gentleman's sport. Truck Racing may use F1 circuits but it's closer in spirit to Touring Cars. Shunts, knocks and crashes are inevitable when eight trucks come steaming down a straight at 160mph, and then all try to fit down the same 90 degree right-hander which is only wide enough for two. I spent a couple of races crashing into everything I could (purely in the interests of a thorough review, you understand) and the damage model works beautifully. Hit someone from behind and you risk damaging the cooling, causing the engine to overheat so you have to slow down or risk an engine blowout. Brake fluid can leak if a line is damaged or even stop working completely - not a nice thing to find out when you're coming up to a chicane.

It's all accurately represented as well. For example, wheel arches break after a side-swipe, but instead of just flapping around, they lift and fall according to how the truck is accelerating, braking or how fast it's cornering. The force-feedback also works tremendously well. On one occasion I was pushing for a fast lap when I got a radio message saying my tyres might be getting worn. Sure enough, come the next corner, I could feel the truck wobbling around through the steering wheel. As soon as the weight came off the tyre, it was back to normal. Superb stuff!

With such an excellent physics engine, it wouldn't really matter if the graphics were absolute crap...but they're not. Like the rest of the options, the graphics are configurable beyond belief - turn all the options on and it looks absolutely amazing. The sheer amount of detail not only on the track, but also on the trucks themselves, is unreal. You can see drivers flailing their steering wheels about inside their cabins, and engine and chassis damage is accurately represented on the models as their frames twist and distort according to the abuse they've been given. Weather effects act perfectly, as you skirt around the corners in the rain, look out desperately for brake lights in foggy conditions and try to set a scorchingly fast lap in the sun.

Naturally the consequence of all this loveliness is a very processor-hungry game. To see it in all it's splendid glory, and run at a reasonable rate, you'd be looking at a P3-700 at the very least. Of course, the amount of options mean it will run on less; it was tested for the most part on a P3-450 and worked very well, but it didn't look half as good.

Put simply, Mercedes-Benz Truck Racing is an absolutely glorious game and fully deserves the "Highly Recommended" award bestowed upon its mantle. Why no gold? Well, perhaps I'm being mean (it wouldn't be the first time), but it's just a smidgen too hard to get into for all but the most dedicated racing fan. There are options to help you find your way around, but they're rather useless -- what good is automatic braking when it just spins your back end around because you're not expecting it? And racing against a fastest lap ghost driver could show you what line to take around the circuit... but if you could keep up with him to learn the line, you wouldn't need his help in the first place!

Nonetheless, for the hardcore racer or even the casual gamer with time to spare, Truck Racing is an absolutely gorgeous, involving and rewarding experience. Forget the Colin McRae 2 's and the Insane 's of this world - you've played them before and you'll play them again. Grab this while you can and you won't regret it for a minute. 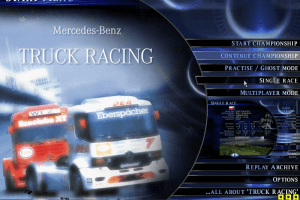 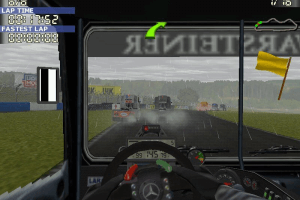 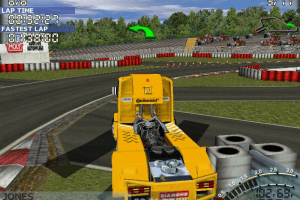 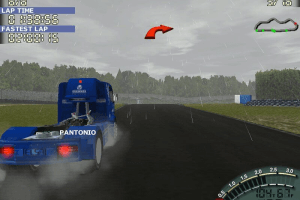 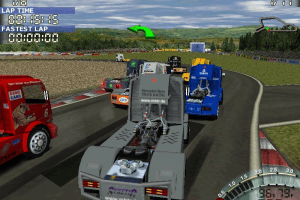 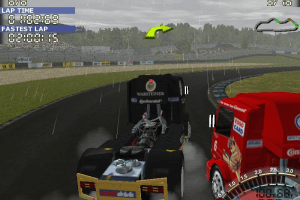 Appears to be running off the Intel UHD 630 graphics instead of the 1050. Any way I can fix this?

Share your gamer memories, help others to run the game or comment anything you'd like. If you have trouble to run Mercedes-Benz Truck Racing (Windows), read the abandonware guide first! 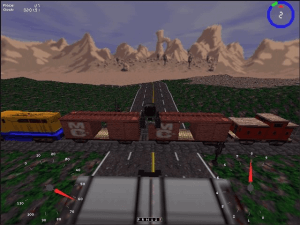 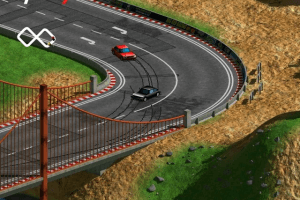 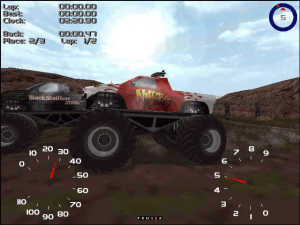 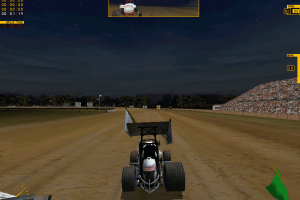