Okay, anyone expecting a serious racing simulation, you need not read any further - this one's strictly for the arcade-racing crowd. Also, anyone who cringes at the thought of their vehicles regularly exceeding 400 kph can also step out. You're not ever going to win a race unless you're averaging in the neighborhood of 600kph (for American readers, this is equivalent to more than 350 mph). So now that we have the correct audience that Grand Prix Evolution was targeted for, let's get on with the review.

My first impression when I popped open the box and started playing the game was that it seems to imitate Jeff Gordon's XS Racing in several ways. First, you strap some driver's name on the box (in this case Nelson Piquet); second, you set the game in the future; and finally, you come up with some outlandish looking vehicles with equally outlandish physics, and you run them around in a race.

The problem is, you take away the superior graphics engine for GPe, and what you have left is a cheap imitation of XS Racing that pales against it in just about every other way.  There are nearly enough cars to race in GPe as there are in XS Racing, but the tracks lack the jumps, loops, and branching paths of the other game.  Even compared to another similar arcade racer, Wipeout XL, GPe seems extremely bland in comparison.

They sure don't build them like they use to

The first problem I ran into with GPe was with my controllers. On my computer, I have 2 USB controllers, the Wingman Extreme and the Wingman Rumblepad. I wanted to use the Rumblepad with GPe, but the game apparently thought otherwise. It will only acknowledge the first controller or the keyboard, plus you cannot remap the keys in any way - controller sensitivities cannot be tweaked nor can the controllers themselves be configured in game. To add insult to injury, the manual is a joke.  What in the world does Piquet's presence do?  I saw no reference to it in the manual, much less anything else. The menu interface is also a bit of a nightmare, suffering from being both unintuitive and keyboard only.

Putting this quibble aside there is another troublesome issue that will affect anyone with a Direct 3D primary card and a Voodoo2 add-on board. GPe will default to the Voodoo2 no matter what, which results in missing textures. The readme advises disabling the Voodoo2 card, but the only way to do it and still get the game to run is to remove the Voodoo2 driver altogether. At best this is sloppy programming.

Can we race yet?

All problems aside, you have GPe which has total of 12 tracks and up to 13 other opponents to race. There are six levels to choose from, ranging from Easy to the Piquet level. You'll likely be lapping people on the easy level, while I can hold my own somewhat on the Piquet level. The AI overall is largely too easy to race against. You can race in single player championship, single race, or multiplayer. As of writing this article, I was unable to find anyone online to play, so I'm unable to comment. Also of note, despite what the box says, there is no time attack mode in GPe. So much for accurate advertising.

If you chose to race the championship, you'll go through a series of 12 races. At the end of each race, you'll receive a certain amount of credits to use on your car. There are two components to upgrade. First is the pod and the second is your engine. Upgrading each of these will go a long away to making an already ridiculously fast vehicle go even faster. With the top of the line equipment, you could push well beyond 1000kph (631 mph). The tracks you race on vary from racing through the city, moon, industrial complex, and more.

The tracks themselves have magnetic walls as boundaries for the road. You hit the wall, you will either slow down or get bounced back onto the road, depending on how sharply you make contact with it. You can race from several points of view, including the external, the rooftop, and internal. If you want the best sensation of speed, you're best off taking the first person view. One thing GPe does extremely well is conveying the idea that you are racing beyond 1000kph. One oddity is with the opponents - the scale seems slightly skewed, as they appear awfully small when side-by-side with your car.

There are also pitstops in the races, however in GPe, the only reason to go to the pits is to recharge your fuel pod. Calling for a pitstop is simple. Hit the spacebar to request the pitstop and as you cross the start/finish line you'll be tractor beamed into the stop. No need to worry about stopping the car or missing the pit-lane, it's all done for you.

It is no contest

While GPe does an excellent job of conveying a realistic sense of speed and has an attractive graphics engine, it ultimately isn't that fun of the game. The tracks are largely uninteresting when compared to other offerings in the genre. The menu interface is horrible, and the AI is too weak. The game clearly feels unfinished, and should probably be avoided. 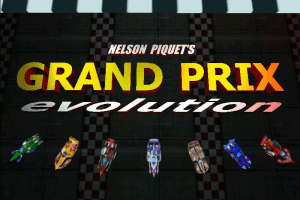 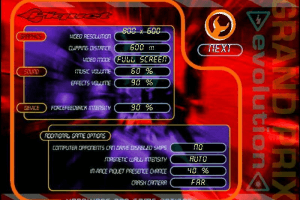 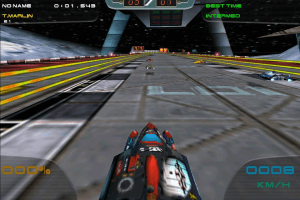 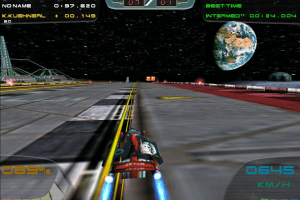 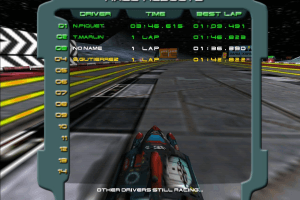 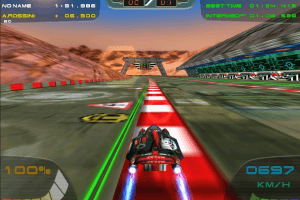 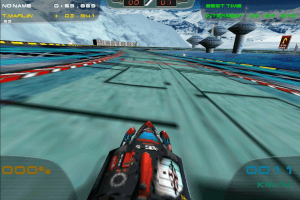 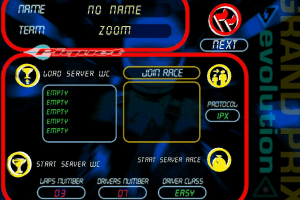 Share your gamer memories, help others to run the game or comment anything you'd like. If you have trouble to run Nelson Piquet's Grand Prix: Evolution (Windows), read the abandonware guide first!